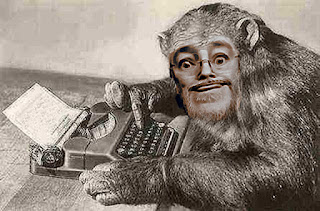 I've come to the conclusion that blogging is writing's version of improv. Or at least the way I've always approached it. I rarely spend more than an hour or so writing a blog post. Sometimes a seed of a thought pops into my head and I start writing. So it kind of approaches real time writing. If I actually had a real time audience reading as I wrote, it would truly be blog-prov.

Computers changed writing the way Gutenberg's press changed the way people accessed writing. It definitely changed the way I approached writing. Writing with a pen or pencil was slow and cumbersome. Typewriters were a bit better, but still you were at the mercy of typos and white out. The first time I experienced word processing and the ability to write almost as quickly as I think, I knew the world had changed forever. Or at least my world.


When I blog, I don't spend much time rewriting. So in reality, what you read in my blog is more real than any novel you'll ever read. You hammer it out, hit publish and it's out there.

You see, the thing I could never stand about having my writing reviewed and edited was that someone else was dictating the way they thought I should have said something. In my blog, no one dictates what I say, but me.

I'm starting to come to terms with the concept that I'm not a published author the way I think Vincent Van Gogh must to have come to terms with being an artist without a gallery. If you feel compelled to create art, you have to get over anyone looking at it or reading it.

The downside of the computer and the Internet eliminating some of the hurdles of writing and publishing is that millions of people are now spewing crap into the ether. It's as if the Infinite monkey theorem has been actualized (the theory that if you had an infinite number of monkeys seated before a keyboard they would eventually peck out the entire works of Shakespeare). But these monkeys aren't typing out Shakespeare.