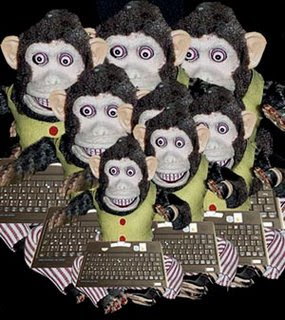 The infinite monkey theorem states that a monkey randomly hitting keys on a keyboard for an infinite amount of time will, according to mathematics, type or create just about any text that has been or will be written. It is popular to assign the monkeys the entire works of Shakespeare (apparently the monkeys get a little pissy if you ask them to tap out the entire works of Stephen King).

It dawned on me today that blogging is nothing but the infinite monkey theorem being put into practice. There is an infinite number of you monkeys out there tapping away randomly at your keyboards in truly what seems to be an infinite number of blogs. And mathematics tells us that sooner or later one of you is going to type out something great. But the bitch is, that it is just dumb luck...er I mean the laws of probibility...that will create the work.

I find this discouraging. In the words of the Elephant Man, "I'm a man, not an animal." I'm just going to come out and lay it on the line: there are too many blogs. Just because you can type and have a computer, doesn't mean you are a writer. I own some pretty sharp knives, but I don't fancy myself a surgeon.

I have known I wanted to be a writer since I was a kid. I took writing classes in junior high and high school. I went to college to BE a writer. I have a JOURNALISM DEGREE. Technically, I am considered a PROFESSIONAL writer. I have spent hundreds of hours writing and getting rejected as PROFESSIONAL writers are supposed to. And then WHAM...the Internet and blogging pops up and all of you monkeys started typing.

If you think I am bitter, you are quite right. I'm here to say, enough is enough. Back away from your keyboards and stop dancing monkeys.
Posted by Time at 9:50 PM

Somewhere, a french keyboard monkey is throwing metaphorical poop at you.

Yep, you're right, there are too many blogs, but there are NOT to many writers. Blogging is not necessarily WRITING, or at least as one with a degree in Journalism would define it. However, for most people, it's nothing more than the noise in their heads escaping into the void, and is not meant to compete against the likes of those who would dearly love to be celebrated, or even paid for their brilliance. It's survival of the fittest, my friend; those who somehow get noticed by the right people will reap the rewards of their labors, the rest of us will fade off into obscurity.

That's why Dances with Leaves is a wholly owned subsidiary of Don't Really Give a Shit Enterprises; we shall never truly know disappointment.

Good God, you're getting deep!

How do you know if you are writing good stuff or if it sucks ass? How does a guy like me differentiate between the two worlds?

I tend to approach my blog with a "Hello, is this thing on?" attitude. It works for me.

Besides, you need to have somewhere where you can suck before you can shine (paraphrased from George Burns.)

It's really quite simple.

I agree that credentials are only valid within a context of that profession. And credentials don't guarantee talent, just respect for one's craft.

I wasn't implying I was a good writer, only that have earned the right to call myself a writer. There is a vast difference between someone who is a gourmet and one who simply gorges themselves.

I stand by my comment that there are too many blogs. A few cars on a highway move freely and are easy to follow. Thousands of cars on a crowded highways are at a standstill and no longer are cars...they are simple a traffic jam.

No wonder I dig your blog!

It took alot of reading my own writing, then writing more, and reading that, ad nauseam, to understand why I will never be called a "writer". So I'll invent the term "font-smith" and apply that. I'm easy.

However, do not ever attempt to sway me with any claim to license, especially a degree. Ever since the day I attempted to conduct a seminar with a room full of science teachers and witnessed the most shockingly juvenile behaviors I never expected to see, I demand that anyone who claims to be "educated" open their mouths and utter a few coherent sentences before I give them the benefit of the doubt. A rather large percentage of the American public thought Dubya was an "educated" man capable of leading the most powerful nation on Earth. I rest my case.

That all having been said, I personally think you, my friend, are a writer. Even if you were crippled by higher education.

Mickey, I am flattered. I like what I've read of the man. Who couldn't like someone who said, "Life is a sexually transmitted disease."

THE Michael, I wouldn't try to sway you with credentials (or my nephew). I'll be the first one to admit that I didn't really start learning until I got out of college. But the diploma was that passport that provided a check while I continued to learn.

And I think you are very much a writer.

That's hilarious! Thanks JanePoe. As long as the monkey shines, I'm happy.

I have to say JanePoe gives a fresh look at the “monkey shine” thing.