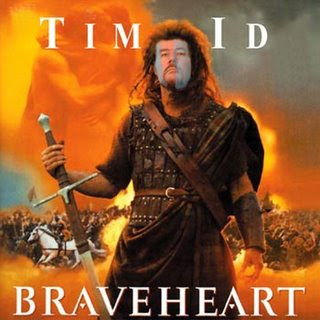 You can say what you want about Mel Gibson the man and his momentary lack of judgement when he was pulled over for allegedly overindulging, but Mel Gibson the actor was pretty darned cool in Braveheart. I don't know what it was, but when I first saw that movie, I just wanted to put on a kilt, paint my face blue and go throw a sword at the English.

Fortunately I don't act on all of my impulses (unless I have allegedly overindulged...but just that once). The authorities aren't very forgiving when it comes to running around in a kilt with your face painted blue brandishing a sword and screaming, "Freedom!"

It's not that I'm even Scottish (though I'm sure my mutt blood contains some Scottish roots down there somewhere). It was just the whole fight for your honor against injustice thing that got to me. That and being able to strut around babbling in a Scottish accent and sounding cool even when you were just asking for directions.

American accents suck. We always sound like we are constipated (unless you stem from the deep south and then you just sound like you are constipated on qualudes). I remember walking on the streets of London years ago and having people stop me to ask directions. The minute I opened my mouth they'd look so crestfallen and say, "Oh, you're American" and walk off.

I played the pauper in a play version of the "Prince and the Pauper" when I was in sixth grade. I got the part because I did a pretty good British accent (for a 12-year old that is). "Tom Canty if it pluleez you sir." The student teacher, Sue Leigh I believe her name was, thought I was brilliant. The rest of the kids just used it as one more excuse to put me in a trash can at recess.

What we lack in our lives are the fictional values portrayed in Braveheart to fight for a cause that isn't sanctioned by a commercial that ends with a politician stating, "I approve of this message." We lack the opportunity to meet on a battlefield in a large pasture or park and whale the tar out of each other with pointed sticks, swords, knives and arrows. We also lack the opportunity to lift up our kilts and wag our private parts and behinds at our enemies in a derogatory manner. If only this was a custom that we could use in business meetings today:

Item one: Throw large broadsword into center of room (1 minute)

Item two: Shoot arrows at each other (5 minutes)

Item three: Charge each other with swords and sharp sticks.

Item four: Ride horses at the people on foot and slash them with swords and
sharp sticks.

I can tell you I would look forward to business meetings alot more if this was the agenda.

I motion to change the agenda to lengthen (pun intended) the introduction of "Wag private parts at our opponents (5 minutes)" to the entire meeting. Let's skip the blood and gore and get right down to the naughty bits.

So, what excuse do people use now when they stuff you into a trashcan?

Miss Bliss, That would defeat the whole purpose of the meeting...obliterate your opposition.

Lights, Ha! I wag my behind at you!

iridethebus,
I was just feeling off kilter after your last comments.

How are your legs? Sexy enough for a skirt? Grinz!

Tim, admit it, if you got a tiny little splinter in your finger weilding one of those sharp sticks they'd have to retire from the battlefield before the fight began, embarrised that their fearless leader is screaming like a girl!

Maybe we could form a "Braveheart" reanactment society. I suggest a change in tactics, tho. We lift our kilts, advance on the enemy, listening on our iPods to Shandi's sexy voice talking dirty to us. I can guarantee the English would be faced with "stiff" opposition that day!

Our jobs are really that boring, aren't they?

TimID .. first off i love the TimID heading over Braveheart..made me go .. "hummm what's wrong with this picture??"

and as for your business meetings.. don't women have a place in your meetings?? if so .. what do we waggle?? we don't have wiggly jiggly bits under our skirts.. unless (thinking very wicked thoughts.. but vowing to stay on topic)

Cherish, I think I have quite the manly legs for a KILT, not a skirt. :)

THE Michael, I would not be screaming like a girl if I got a splinter. I would be shrieking like a manly man.

Morningstar, First it is good to have to back and on topic. I'm glad you like the TimIdheart header. And I suppose women could take part in the meetings as well and waggle whatever they choose to. All's fair in love and war!

Isn't it funny that women don't tend to expose themselves as an insult. They're also not prone to saying things like "Bite me" or "Eat Me" while grabbing their crotch. I tried to imagine it. It just doesn't work. But, we ladies could always claw, scratch, pull hair, bite, and call eachother "fat".

As for the whole "shandi's sexy voice" thing Michael... hmmmmm interesting. I should do an audio post today. I have lost my voice due to some sort of cold and I sound like a 60 year old chain smoker. Do ya think that would get ya off? :-)

Shandi, I have know women to moon people. And if the truth were told, I don't know too many men who wag their private parts at each other, either, at least not as an act of war. Hollywood takes liberties.

haaaa haaaa I forgot about that time. Yeah well, the cop deserved it.

lmao....i'm so glad i'm only from the South and not the DEEP south and i'm hoping my accent doesn't sound like i'm constipated on qualudes! And, well... something about a man in a kilt that makes a girl go hmmmmmm. Still laughing... and the comments, Tope rate!
Hugs, ~gina~

Thanks you all, Gina. I'm glad you are still out there!

actually, your agenda sounds a great deal like the business meetings I usually attend, except that people clothe their actions in euphemism. That's exactly what they're doing, though.

No point belaboring the kilt; that wasn't the historically correct way to go into battle. Actually, they covered a lot more than their faces with woad dye and went into battle butt naked. Made wagging their naughty bits more convenient, I imagine, and meanwhile scared the crap out of the over-dressed Romans. Less protected, but a whole lot more agile.

Hayden, you are absolutely right about meetings already being like that. Personally I am grateful people remain clothed. And thanks for that historical moment about the real Scottish battles. I know it would startle me to see a thousand naked painted men running at me with spears. In Seattle they call it the Fremont Fair.

(I confess, I've long been transfixed by the idea-image of terrified, leather-clad Romans running from naked blue "giants" raging down out of the highlands, or breaking across the barrier of Hadrien's wall --- humm, now that you mention it --- here in SF we'd see the equivelant at the Folsom Street Fair, I guess. But the attempt at escape would be make-believe.)