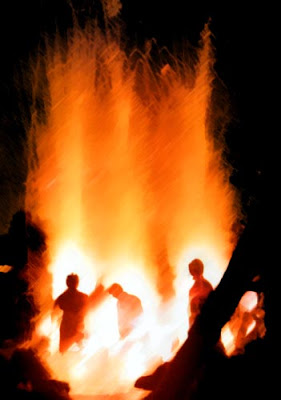 Years ago, when I still had the energy to seek out potential stories to write about and try and sell freelance, I tagged along with a pyrotechnics team staging a fireworks show from a barge in the middle of Lake Washington to entertain people attending a Microsoft party. It may even have been at Bill Gates' house. I had my camera with me and put it on a tripod with an open exposure and captured the image above. I always thought it looked like a scene from hell.

This is not to say that I know what hell looks like (though I have been to Salt Lake City). I do find it ironic that hell is always associated with heat and flames. Personally, I would have chosen some place like Antartica as hell. Just talk to one of those poor penquin poppa's that have to sit on an egg for months in subzero temperatures. I'm sure they would opt for some fire and brimstone.

I suppose it will be a cold day in hell before the bible thumpers would accept an icy hell versus a hot one. But isn't it a bit ironic that cremation is an accepted form of releasing the spirit from the body in many cultures, including parts of our own? It makes more sense than burying them in the ground (closer to hell) and hoping they'll make it to heaven.

There is no question that I want to be cremated (after I die of course). Oh sure, I don't get the tombstone, but let's be practical here. Having a tombstone doesn't guarantee you will be remembered. Tombstones are about as effective as having your name in the phone book for being remembered.

I haven't decided where I want my ashes scattered, though. That could be problematic. I don't want them sitting on a shelf. I don't want them dumped in the ocean (I'm not much of a swimmer). Maybe I should request that they be used to make bricks or glass or something that can be placed as part of a building. That would be kind of cool. It would have to be some useful building, though and not something stupid like a Jack in the Box.

I hate their commercials, by the way.

I'd like that written on the brick.
Posted by Time at 6:22 AM

I have it on good authority that hell is sitting in a Martha Stewart Audiance learning all the interesting things you can do with spam and toffu, for all eternity.

"All in all you're just another brick in the wall."

Didn't Dante invent a cold circle somewhere in there too?

THE Michael,
Spoken like a man who has been there.

R.
That's what I'm talking about. Another brick in the wall. Maybe that is what I should have inscribed on my brick.

somewhere - I don't remember the name - there is a company that will accept your "cremains" and make them into a diamond. Well, a faux diamond, anyway, and we know that nowadays those look pretty natural.

ok, I found it for you. Too important, wouldn't want you to miss it. http://www.lifegem.com

because "love lives on" or some such crap.

Hayden, Although I have always believed I am a diamond in the rough, I think I will stick to my desire to be made into a brick. But I did see that I can have our cats turned into diamonds, too. So I'm running the idea past Tess. :)

I think you should be split up between all your blogging buddies and we can sprinkle you into our computers. We will just have to watch when the tech vacuums the inside of the computer. Everytime we get a new computer we can say please transfer Tim to the new one. ~winks~

PS: That is really a wicked/awesome picture!

Miss Bliss, And a man's best friend is his dog. So if you have your dead dog turned into a diamond, I think harmony has been achieved :)

Cherish, I'm not sure IT people would buy into that. Besides, I've seen cremated remains and they are more like pebbles than ashes. And I'm glad you like the photo. I've always been proud of it.