Would someone open up a window 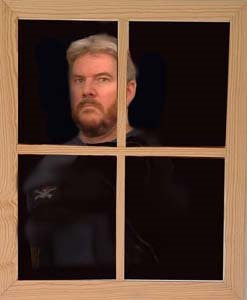 There is rarely a more over used cliche than "the eyes are the window to the soul." I'm willing to bet that every Creative Writing 101 student has slipped that little gem into some assignment along the way. And I'm also willing to bet that every time the instructor of the Creative Writing 101 class reads that classic phrase in a student's writing, their own windows to the soul are threatening to roll so far back into their head that a brain hemorrhage is a serious risk.

Besides, if the eyes are the windows to the soul, wouldn't being near or farsighted skew things. I started wearing glasses when I was 14. Did that mean my soul was myoptic? And wouldn't you think that my perspective on the world around me would have been significantly improved six years ago when I had Lasik surgery. I think not (though I can read the clock first thing in the morning without squinting...that is pretty cool).

To some animal species, eye contact is a sign of aggression and will trigger an attack by the dominant animal. Of course, "civilized" people try and convince you that it is a sign of confidence and trustworthiness to look someone in the eye. If you don't make eye contact with someone, they think you are lying. Conversely, women really get annoyed if men make eye contact, but not with their eyes.

All that being said, I really prefer to wear sunglasses. I like to think of them as the levelor blinds to the soul. I don't like people looking into my eyes. It breaks my concentration. I think better if I'm focused within, not on someone's eyes. It doesn't mean I'm lying. It means I'm thinking (or ignoring the person who is blathering on to me about nothing). Sunglasses make it easier to avoid eye contact and appear interested in a conversation.

Also, I don't like people staring at my soul. When I wear sunglasses, my soul can stare at them. 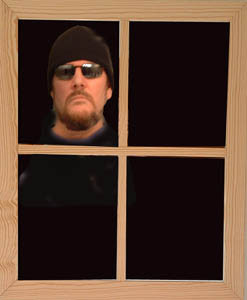 "Conversely, women really get annoyed if men make eye contact, but not with their eyes."

This is the reason you wear sunglasses. ;-)

Puleez...like there is a woman alive that couldn't tell where a man is looking at any given moment, sunglasses or not 8-)

As I told my wife in a resturaunt a few weeks ago - "You can't admire a woman without looking at her."

"I leaned closer, gazing into her lovely eyes and found myself drowning in the liquid view the windows of her soul exposed.

She sneezed explosively. I recoiled in reflexive horror as my face was impacted by a spray of bloody sputum reeking of putrescence, licorice, and menthol cigarettes."

Just to clarify - I am not the one sneezing in R's comment. *ahem*

R&K,
Point well taken and it is nothing to sneeze at.

Gaze into the eyes of some people and all you'll see is the back of their heads.

THE Michael, As Shakespeare said, "Eye, there's the rub." Or something to that effect.

In any event, I *finally* purchased my first pair of prescription sunglasses last year and absolutely love them! Being someone who failed miserably at contacts & doesn’t have the $$ (or the nerve) to do Lasik, I am in heaven with my sunglasses.

By the way, you look pretty bad-ass with your shades and cap!

JanePoe,
I think the soul is reflected in actions. And Lasik surgery is much cheaper than you would imagine. It's pretty darned cool...if it works.

Cheese and Rice, Tim - you do look good in that cap and sunglasses...man, you look so bad, you're good.

And you can look at all the pretty ladies without Tess smacking the crap out of you.