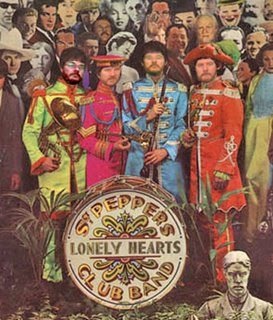 I'm not certain where our muscial tastes come from. It's not just growing up with certain types of music that makes you like it. I grew up with the Beatles and the Stones. I like the Beatles, but I don't like the Stones (okay maybe a couple of their songs). I also grew up with disco. Enough said?

I learned to like classical music listening to Bugs Bunny cartoons growing up. I picked up fondness for big band music and showtunes from my father. I learned about the Beatles from Ed Sullivan and was inspired to buy my first album (Revolver). I listened to pop music on a tiny battery powered transistor radio while growing up in Idaho. It really taught me to appreciate lots of different types of music (dependent upon the signal de jour).

I began playing soprano clairinet in grade school (my dad had played it briefly when he was young). By junior high I was playing contra alto and bass clairnets. Later I would play contrabass clairnet in the all-state band. But I also played guitar, bass guitar and even bass drum if required in the marching band.

Band further taught me to appreciate classical and more traditional forms of music (though in my senior year we built our football halftime show around Jesus Christ Superstar and Live and Let Die). The first rock concert I ever went to in Boise was Boz Scaggs. The second was Cheap Trick and Molly Hatchet. Later, when I moved to Seattle where big bands actually toured through, I saw Little River Band, Moody Blues, ZZ Top, the Prentenders, Doobie Brothers, Eric Clapton, Harry Chapin, Air Supply, Tori Amos, and (hate to admit it) Barry Manilow.

I know it is cliche, but I literally do like lots of different types of music. Most importantly, music should make me feel something. It doesn't have to be a major emotional epiphany (though Pink Floyd moves me every time). It can simply make my head twitch because I like the beat (this explains the Kid Rock, Eminem, and Rob Zombie in my collection). In the right mood, I'll even listen to Garth Brooks, Brooks and Dunn, Willie Nelson. And I do have most of Elvis' early music.
But if push comes to shove, I will always consider the Beatles the cornerstone of my musical roots (sorry Kristy). Because you always remember the first album you buy (I'm not sure what the iTunes generation is going to remember).
Posted by Time at 9:17 PM

This is getting surreal......I never cared much for the Stones either. Where as the Beatles seemed to understand that a song crafted and performed well was a better song, the Stones just banged out noise behind Mick while he pranced around attempting to shock the establishment. They did produce a few good songs in the studio that I really enjoy, but listening to them live is just painful.

I had hoped that Collective Soul was going to be the next group to become timeless, but they haven't been able to gather a strong enough following to put them in that position, at least as far as I can tell.

You saw the Moody Blues AND Boz Scags? I hate you.

I would have named Led Zepplin as the third leg of a triad if the oldies stations hadn't totally overdosed me on them.

That's okay, Tim. Now let us agree to never speak of them again (The Beatles, anyway).

I too have been known to play the contrabass clarinet. We affectionately called it "the sewer pipe" in high school.

Thanks THE Michael, You know, I never much listened to Led Zepplin until I discovered Dread Zepplin, the Led Zepplin cover band whose lead singer is Tortelvis, an Elvis impersonator. There stuff is awesome. As for the satin, you don't think it makes my butt look big, do you?

Oh, and you should go over to Kristy's page and comment about the Beatles. She is a huge fan.

Kristy, I've taken the liberty of signing you up for the Beatles-a-day e-mail list.

The contrabass sounded a bit like a sewer pipe as well.

The Beatles were much better after the original Paul McCartney died in '66. Or maybe it was all the drugs they started taking around that time. Who knows?

The point is that they created all that interesting music with hardly any significant use of the clarinet. This was revolutionary since most major rock bands to that point had used clarinets almost exclusively. Pink Floyd, for instance, was originally composed of only a singer, a clarinetist and a guy who banged two rocks together.

Thankfully the Beatles changed all that and opened up rock and roll to other and (arguably) better combinations of instruments.

Lights,
With so much knowledge, one would think you would update your blog more. At least a toilet bowl sequel. Perhaps it was because I played the clarinet that I was never asked to be in the Beatles.

Kristy,
No need to thank me. It's no EX knife holder, but it's the least I could do. I hear they are going to have a "Who's your favorite Beatle essay contest." You are a shoe in.

Tim! I'm jealous ... you saw the Doobie Brothers! Damn. My first concert was Journey. I did grow up with my parents listening to Pink Floyd, The Doobie Brothers, and others on the 8-track. Thanks for the great post!

Thanks JanePoe, Yes, I saw the last Doobie Brothers Tour Concert before their first comeback concert. I imagine now they will be coming to the Emerald City Queen. As for Eight Tracks, it was a technology that was ahead of its time...still is :)

Hayden, I have it from a reliable source that the Beatles started drinking Absinthe.