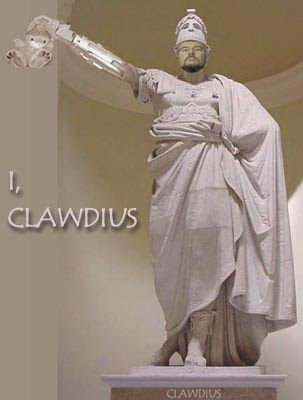 Yesterday, someone commented on a blog entry I wrote back in October of 2004 about my amazing ability to win prizes from claw machines called Doing the Claw. First, it freaks me when I get comments on some old entry because like most people, once it's off the recent entries list, I forget all about it and don't know what the commentor is talking about. Second, it reinforces my theory that people are doing google searches on some pretty random stuff and have way too much time on their hands.

Not that I don't appreciate someone reading the archived material. No one read it when I first wrote it, and after rereading "Doing the Claw," I have to admit it was pretty cutting edge. One might even said it was ahead of its time. Because when I did a random search for "claw machine blogs" I found lots of people jumped on the bandwagon after me and started writing about claw machines.

For example, I found a photo of a claw machine in Japan where you try to pick up live lobsters instead of stuffed animals (which are really too cheap to really give away as presents). 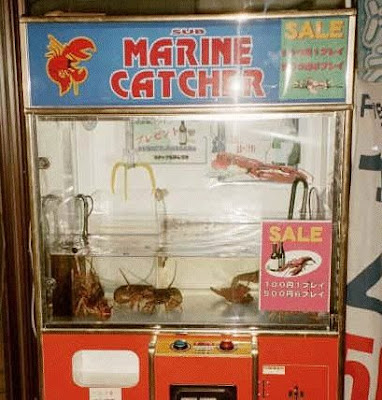 Sorry, it just doesn't work for me. Although I've been known to eat the occasional lobster tail on a cruise, I've always had difficulty with the whole choosing what creature you are going to eat before it is dead routine. Hypocritical, I know, but it's just the way I feel. Tormenting the poor creature with a claw machine is just wrong.

That being said, I think I would be very good at the Marine Catcher, because I am still the Jedi of the Claw Machine. I've been banned from several Top Foods grocery stores in the Pacific Northwest (and not just for those misunderstandings in the produce sections...I don't want to go into it here). And I'm convinced that Sugarloaf, the company that makes most of the claw machines in area grocery stores, has given up sending ponytailed cyborgs to throw me off my game and have resorted to semi-harassing phone calls and spam. Just a theory and not an accusation (I'm saying this for legal reasons).

I've taken to wearing disquises when going to the grocery store just so I can play the claw machine without being ejected or drawing a crowd. Celebrity has its price. But if you see a middle-aged man dressed in a Teletubby suit (not the purple one) playing the claw machine in your grocery store, I can assure you it is not me. Do you think I'm that tacky?
Posted by Time at 7:16 PM

i am laughing my head off.. and trust me Tim Elvis after my day today.. that is just what the doctor ordered........

AND .. what the devil is wrong with the PURPLE Teletubbie please???

And of course there is nothing wrong with the purple Teletubbie. Some of my best friends are Teletubbies. All I'm saying is that I won't be the one dressed like one, nod, nod, wink, wink...

HA!!! Classic. Love those claw machines. I was pretty good at it myself. I heard that some can be set on a ratio... say like 1 good grab out of ever 20 failures. Kindof like slot machines. Which is why.... OHHHH GOD, I CANNOT GAMBLE. I'm getting tense just thinking about it.

Be in denial all you want Tim... but I know you really like the purple teletubbie the mostest :) and I know why. My question... do you wear green boxers under all that purple?

I can't get the hang of those damned things. I don't recall ever actually snaring a prize. And that's with inanimate objects as the target. I can't imagine succesfully grabbing a lobster with one of them.

You have been a victim to an urban myth. Claw machines are the last pure test of the righteous. Which is why I am so good at them.

Boxers? I am wearing Dog Playing Poker boxers as we speak.

And my new theory?

You and Lights are both the same person and you are Stephen King. Sick, I know, but a definite possibility.

I am laughing so hard for two reasons.

Number one: My kids are crazy over the claw machines. No matter where we go we are feeding those machines.

Number two: My family went to Maine. They had these HUGE holding tanks with lobsters in them. I ordered lobsters for the family and the guy wanted me to pick out which ones we wanted. I said no thank you and he looked at me like I had three heads. He said pick out the one you want. I said I do not want to pick it out, just pick it after I leave. He was laughing so hard and proceeded to tell all the guys working there. They were all hysterical. I am like that with crabs as well. I live on an island and we have crab feasts well if I see the crabs alive I just can not eat them. I know it is hypocritical and stupid. But it is just like steak I do not want to know or see the cow when it was alive.

Thanks Cherish. Your children have chosen a wise path in trying to master the claw. It has made my life more fulfilling (or at least the trips to the grocery store). And it is good that you have compassion for the poor crabs and lobsters. I can barely walk by those tanks without having the urge to let them loose and scream, "Run Forest, Run!" But the fear of authority keeps me in check.

OUWWW i nevercan get anything out of those machines!!And you pronounce Dumas Du-mas Not Dum-as although I am sure they have heard that one before LOL

Poody, Some people are born healers, some are great philosophers, but I was born with the talent for the claw, but only discovered it later in life. So don't despair.

I'm sure the poor citizens of Dumas have suffered their share of rude remarks. I just know that growing up in Boise most of us thought the Three Musketeers was written by a Dumbass. :)

There's a lobster tank/claw machine in Jacksonville, FL at Whitey's Fish Camp (at least used to be). Biggest lobster I ever saw.

Have you ever thought of using your magical skills to FREE THE LOBSTER? That is, you get it, and you order it released, etc.?

I suppose it would be a way to share my gift with society. I will seriously consider that the next time I run across a Lobster Claw machine.