That was Zen, this is now 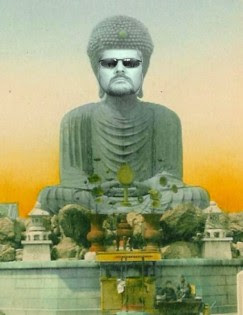 In the not too distant past, I was a Buddhist. I knelt. I chanted. I burned incense and I sought inner peace and enlightenment. It hurt my knees.

Don't get me wrong. I appreciated the Buddhist philosophy and admire those who walk the path. But ultimately it didn't turn on the lightbulb for me. I think most of my friends and family were relieved when I stopped chanting (I became dis-en-chanted, so to speak).

Being a Buddhist was just one of the spiritual paths I experimented with. Having been raised a Christian Scientist, I'd been exposed to the philosophy of spiritual healing. That held my attention until I was 16. When New Age philosophy became popular, I tried crystals, Creative Guided Meditation, astrology, Tarot, Runes, palm readers, and floatation tanks. The Buddhist phase came after that.

Somewhere in there I went through several types of therapy with several counselors and psychologists to help me understand the relationships I drifted in and out as sought meaning out of my life. At various times, I took designer anti-depressants. I read self help books and books about Quantum physics. I listened to subliminal tapes and chanted self-affirmations as much in the same way I'd chanted as a Buddhist.

It was all part of my search for the truth or a truth. And did I find it? Nawwwww. But I did discover that much of the urgency and feeling of being lost that I experienced in my youth softened as I got older. I discovered that the easiest way to find something is stop looking so hard. That's when I just sat back in my recliner and relaxed.

I may have not found the truth, but somehow I've found a bit of peace (and my remote control).
Posted by Time at 7:16 PM

what was it we were supposed to post when we couldn't think of anything intelligent?? hell i don't remember.. but how about this:
i see canadians......... ??

I will meditate on that morningstar. I realize you are from the other side of Canada. In BC they would say, I see Canadians, eh.

I tried many of those philosophies as well. I even remember taking lessons on seeing auras. Ohhhh and coincidentally I recently posted about also trying the anti-depressants. I was just trying to find an effective way of ignoring my problems.

The biggest lesson for me, I can't control the actions of another person. Many of my problems eventually have a way of working themselves out, whether I get all worked up about them, pray, talk to a shrink, complain to my friends, or take drugs or not.

I'm liking your "Easy Boy" philosophy. It may be the closest to the "TRUTH".

I think it is natural for us to look for ways to achieve peace of mind. And you hit the nail on the head when you learned that you can't control the actions of another person. If someone had taught me that right up front, it would have saved me a fortune on crystals and runes. Now the Easyboy philosophy. There's a worthwhile investment. :)

I stopped actively seeking truth when I realized that truth is relative. Things are, or they are not. Believing in things do not validate them nor does it marginalize them. Like a guy playing an alien once said, "Nothing is impossible, only improbable."

And it is probable that there's not an ounce of truth in anything I've just said. But, ya never know.

I've also read that nonsense is only nonsense until you find the perspective from which it makes sense. Regardless, I think we all have arrived at the same conclusions.

Peace and the remote control what more could you want in life!