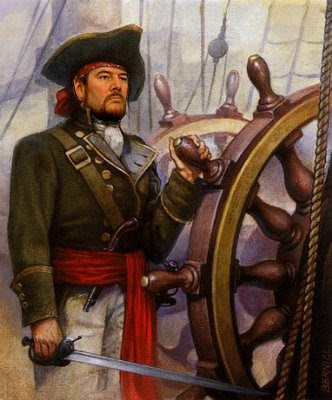 Swashbuckler: An Elizabethan youth or ruffian often predisposed to street fight and duel, so called by the "swashing" sound created by sword and buckler on the belt as the youth swaggered about town. More likely derived from any person who roved the town, usually in gangs, hitting his sword against his buckler as a way of challenging innocent passers-bye to a fight. The term "swash" also has more than one meaning. In older English swish or swishing, meant "to hit". ...

I am a swashbuckler in my heart. I'm not a fighter, though. I have never considered myself a bully. So maybe I am the a romanticized version of a swashbuckler in my heart. Well, maybe a pirate. I would probably dress like a pirate if I didn't think I would look like an idiot or worse yet, Prince. I also think it would be cool to walk around with a sword. At the very least, I would get my own seat on the bus.

The whole pirate theme is prompted because Tess and I are going on an 8-day Mexico cruise this Monday. And although real pirates probably didn't have a chocolate buffet, cruising always puts me in the mood to sing sea chanties and fantasy about sailing the seven seas (not the salad dressing).

I love being on the water. I love cruising. Tess and I got married on a cruise ship last April. The sea is in my blood (along with fat and cholesteral from fine dining). Cruising is a great way for me to satisfy my love of sailing without having to deal with the hassle and expense of owning a boat. Not that I know how to sail. But I know how to cruise.

My biggest pet peeve with cruising, however, is the people. First time cruisers are the worst. For one, they complain about everything. You'll hear them bitching about the boat rocking, the cabin size, the food and the entertainment. They complain about the crew, the ship and the shore excursions. But you can bet they are the ones with four plates each at the buffet stuffing their pieholes with more food than a small family could consume in a week.

If you can overlook the people (no small feat on a ship with close to 3,000 people on it), cruising is just fine by me. I love sitting on the verandah staring at the water. Sometimes I'll pop awake at sunrise and stand out there watching the sun come up over a nice tropical harbor. It's a little slice of heaven that I will gladly go back for a second helping of.

I may or may not blog while at sea. There will be an Internet cafe but as with everything on a cruise, you pay dearly for the price of staying connected to the mainland. Regardless, I will very likely be accumulating tons of blogging material over the next week and I plan to take tons of photos.

So I leave you with this sentiment, "Arggg...." 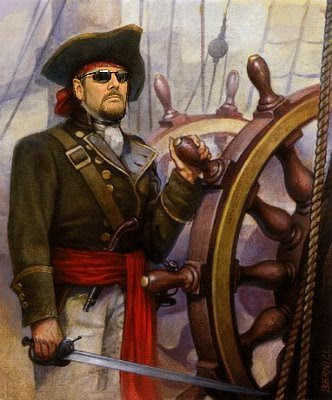 Have a great tim Time.

For the record; I only complained about the rocking on the last leg of our journey. Everything else was wonderful. Okay... so the vomit on the window ruined my appetite somewhat... but Hey, That's to be expected with all the damn rocking, swaying, dipping, pulling, tugging, flipping,.... oh God.. I'm feeling nauseated.

Teri and I had a great time. The food and the entertainment was wonderful.

Try to blog from the ship at least once. Pretty please!!!

GREAT PIC!!!!!!!! You are amazing...
Wishing you a safe voyage filled with lots of love, sex, awesome food, no grouchy people, beautiful sunrises and sunsets, great weather, beyond awesome entertainment and anything else that will make your trip perfect!

i too hope that You will have an excellent cruise. i've been on a cruise twice. Wasn't too crazy about the first one. But had a wonderful time the second time around. i'll be awaiting your updates and funfilled stories of your time away. Peace and be well on your journey upon the water and beautiful wide open skies and sunsets.
Hugs,
~gina~

have fun and don't get mysteriously thrown overboard.

Look, if you have to walk the plank, demand mahogany, between 3/4 and 1/2 inch thick. It has the perfect flex without bending under your weight that badly while you are figuring out something clever to say on the end of the board, which might gain you enough minutes to come up with a diabolical escape plan.

Shandi,
I would have complained about the vomit on the window (unless it was mine on the cabins below me...then it would be okay). Not too much rocking so far, but everyone at our table is on their first cruise and some looked a bit green (but that could have been from the fruity drinks).

I've sprung for a 100 minutes in the Internet cafe. We'll see if that buys me some blog time.

Cherish, thanks for the well wishes. All have come true for the first day. Let's hope I can last for another 7 days.

Gina, And thank you. I will do my best enjoy myself. So far I've had the first pedicure I've ever had. But I didn't get the nail polish...the colored stuff anyway :)

Thanks for the advice the michael. This coming from a guy who worked on a submarine is especially comforting.