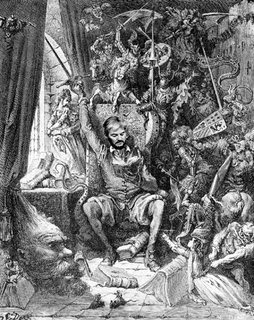 If you are familiar with Cervantes then you are probably familiar with Don Quixote. One of the important contributions of Don Quixote was that he (a fictional character by the way) spawned the word "quixotic." It means "idealistic and impractical."

I have always identified with Don Quixote.

Just in case you haven't read the novel Don Quixote (or seen the musical version, Man of la Mancha) the plot is relatively simple. Alonso Quijano is a low level noble living in Spain in the early 1600s. He is obsessed with stories of knights errant (essentially knights in shining armor riding around doing good deeds). Unfortunately the era of the knight errant has passed. Unwilling to accept this, Alonso decides to become one (or thinks he is one). He renames himself Don Quixote (Don being a higher class noble and Quixote being a piece of armor). A motivational consultant would have considered this a positive move to reinvent one's self. A less positive view would be that Don Quixote's wheel was spinning but the hamster had died.

Of course Don Quixote's family thinks he is a major whack job, especially when he rides off on a skinny horse with Sancho Panza, his servent, to find adventure. One of the most famous adventures he has is attacking a windmill because he believes it to be a giant (this is where the phrase, "tilting with windmills" comes from).

Don Quixote was written as a parody of the chilvalric romances that were popular at the time. So Don Quixote was not really intended as a character one necessarily should identify with. But he is one of my heroes. Because I choose to believe Don Quixote attacks the windmill not because it is a giant, but because it just might be.

Romantic concept isn't it? In his own myoptic fashion, Don Quixote represents this pure idealist that forges ahead even in the face of a dismal reality of a world that no longer has room for heroes. But is it really madness to want to believe in a world that meets your ideals rather than accept the "real" one that falls short? I think it is kind of cool, myself.

Does this mean I'm quixotic? And by admitting to being quixotic, would I qualify to park in the handicapped parking space? It would be interesting to go to the DMV or wherever you apply for the handicapped parking permits, fill out the application and cite being quixotic as the affliction that justifies being able to park close to grocery store entrances. I'm willing to bet 99 percent of the clerks I'd hand the application to would simply glare at me in that fashion bureaucrats who work behind counters have perfected and drone on about needing a doctor's signed note declaring that I am indeed certifiably quixotic. I'm also willing to bet my doctor would probably give me a signed note in exchange for another excuse to whip out a latex glove and bend me over the examination table (any man over 40 will understand this phenomenon).

But if I the doctor declared me quixotic then I would have to break it to my mother.

"Mom, sit down. The doctor has just told me that I'm quixotic."

"I thought you liked women? Does Tess know?"

"No mom, I like women. Quixotic means I'm idealistic and impractical."

"Oh...okay, dear. Did I tell you that Duchess killed a squirrel this morning."

But I am really digressing, now.

The point is, I'm proud to be quixotic. I think it is better to attack a windmill than to sit around waiting for it to break into your house and tromp mud all over the carpet. That's just the kind of guy I am.

Go ahead and bring it on windmills, for I live the life quixotic!
Posted by Time at 5:31 PM

Tim, you and I are so much alike in this fashion. I have all to often walked thru a world of my own making, living according to rules I made myself, at least in my mind. I envy those rich people who can immerse themselves in the worlds they prefer, if only within the boundries of their homesteads. Me, well, these days I guess I'll settle for being the husband of a witch. It's cheap, it's different, and I get cast spells. I still can't figure out how I'm gonna get this vacuum cleaner off the ground........

I have never read Don Quixote. I thought it was a book about one man's acid induced journey into the supernatural. I was misled. This sounds like an interesting read. Maybe something I need right now... a little idealism.

As pessimistic as I am, I would be the character that kills the guy that made the windmill. I must keep him from making more windmills and any other evil contraptions that may ruin my life and the life of my decendants in the ever after.

You're absolutely right. I did confuse the two. To be honest, I haven't read either, but have always meant to. Do either of those two books have really great paper? Maybe you could blog the entire book for me, one line at a time. I haven't read a good book since taking up this preoccupation.

Time said...
This comment has been removed by a blog administrator.
10:57 PM

I haven't read a book since I have had a Blackberry. And you don't really have to read any books any more if you google the Cliff notes or equivalent. I don't believe I have ever read Don Quixote, though I have read all of the Don Juan books. I don't think it was worth the effort.

I do think you are on to something about posting the entire book. I think it will be more practical, however, to post a paragraph at a time rather than a line. It should speed up the whole process.