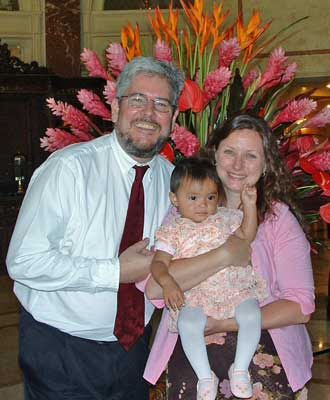 My daughter is special. Not only will she get to celebrate a birthday each year on October 18th, she will also get to celebrate August 28th. That is our Gotcha Day. It is the day that we dressed her in a new dress I'd bought and packed for the occasion, and took her in a cab at 7: 30 a.m. to the U.S. Embassy in Guatemala City for our final visa appointment. It is the day that we waited in line with 15 or 20 other adopting families to be ushered into a small waiting room lined with windows where weary clerks called names and numbers and processed forms to legitimize in the eyes of the US government what we'd already known in our heart for months -- that EM was our daughter.

"H**** family, please proceed to door number 11," was the announcement we waited for. We lined up by what looked like a closet door. Several families were in front of us. Each entered the door and returned a few minutes later smiling. Our turn came and we entered. It was no more than a closet with two chairs in front of a bullet proof cage where an Embassy staffer sat behind files stuffed with the paper trail that had led us here. He asked to see our passports and the bright new, red Guatemalan passport that had been issued for our daughter. He asked a couple of questions about how many times we'd visited and then stamped our file.

"Your application had been approved."


We went back to the waiting room in shock. Our name was called again to go to another window where yet another Embassy staffer had us raise our right hands and swear to something. I was in such a daze that I can't remember what it was. He then told us we could come back the next day at 3:30 p.m. and pick up our visa that was our ticket home with EM.

We left the Embassy quickly and caught a cab back to the hotel. EM seemed oblivious to the momentous occasion as Tess and I hugged her and reassured her that she was ours now and we'd never let her go. We took her to the pool once we got to the hotel and all of us played in the water. Tess and I recalled earlier trips to the Westin and the pool when EM was much younger and much less enamored with the water. Now she splashed confidently, held up by her mother's arms and smiled with her gummy grin.

That night we went to dinner at the hotel restaurant to celebrate. We were seated in dining Siberia. It's one of those things we are learning as parents. You have a baby you are tucked away at restaurant in places where crying and food tossing will not bother the other patrons. That was fine with us. We each had a glass of wine and took turns moving things out of EM's reach and placing non-choke able bits of food in her mouth.

We shared a cab the next day with another adopting father going to the Embassy to pick up visa's. This was his second Guatemalan adoption and he was pretty nonchalant about the process. We returned to the same waiting room at the Embassy and chatted with some of the familiar faces from the day before. Finally they began calling names. We heard ours and Tess went to the window with our passports to retrieve EM's passport with her US Visa. Within minutes we were back in a cab for our last night at the Westin. 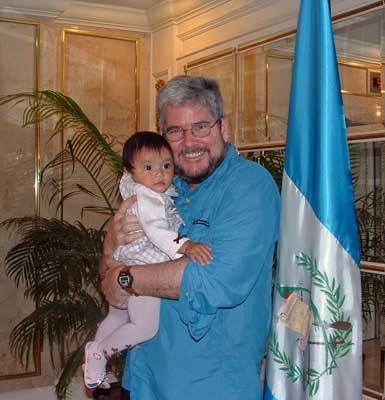 Then next morning we took the hotel shuttle to the airport. Both Tess and I breathed a sigh of relief when we had checked our luggage, cleared security and finally filed onto the plane to leave Guatemala with our daughter. There had been too many trips from that airport without her. The flight, EM's first (I didn't take my first plane ride until I was 15). I had booked us in First Class. Coach is traumatic enough for adults on long flights. I wasn't going to inflict that on my baby daughter. She did reasonably well considering.

We touched down in Houston and Tess and I gave each other knowing looks. We had brought our daughter to the US soil. The unpredictable ebbs and flows of the Guatemalan legal system were behind us now. We went through immigration and handed them all of EM's documents. They escorted us to a backroom where the documents were examined. Finally the immigration officer stamped EM's visa and said we could leave. As we passed through the door we heard the officer mutter, "Congratulations."

It didn't matter. We heard marching bands in our heads and imagined fireworks and other sounds of celebration. We hugged our daughter close to us headed off to retrieve our luggage and catch the final flight home.

It has been two weeks now since our long journey ended. And already the pain and anxiety of the long process is beginning to fade. The waiting and worrying about when we could be with our daughter has been replaced with the day to day joys and worries about naps, feedings and dirty diapers. The process of adoption has been replaced by the process of parenting. And each time I place EM in her crib I look at her peaceful sleeping face and whisper, "Sleep well, hija. I am so glad we finally 'gotcha." Te amo." Then I watch for a few moments to make sure she is breathing and tiptoe out.
Posted by Time at 1:13 PM

Simply beautiful mate. All 3 of you!

Thanks Steve,
It was a day for smiling for sure :)

Blaznfyre,
Well it is a special day, indeed! Happy belated birthday. I will always remember it from now on.

The blog posts just keep getting better and better.

Thank you for sharing this journey with us Tim. I know the process wasn't easy, but the result, becoming parents, is worth every moment. Your daughter is a very blessed soul ... I'm so happy the three of you found each other. Peace and love, JP/deb

This made me smile as goofily as I ever do! Congrats Tim! What a lucky kid Enya-Maria is.

The deep happiness in your faces is clear evidence of the rightness of this; for you, for your wife, and for Enya-Marie. Its wonderful, Tim, I wish you all the best!

JP,
Thanks, there is no question in our minds that it was worth it. EM has enriched our lives.

Kat,
Thanks! We feel like pretty lucky parents, too.

Hayden, Welcome back and thanks. It's pretty hard not to smile when we look at her.

I'm so, soooo glad I stopped in here to see how Tim is doing. Now sitting here crying I wish You, Tess and your BEAUTIFUL Enya-Maria the very best of love and happiness in your journey together as a family. Bless you All. I'm so happy for You. Cherish every momentwith your lil angel.
Love & Peace,
~gina~

I am extremely happy for all 3 of you Tim and hope the happiness you feel right now will last for always.