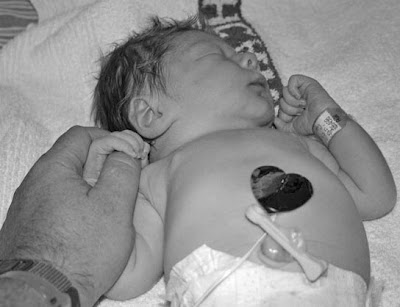 Maybe it was growing up Christian Scientist, but I have never liked being in hospitals. I suppose no one really likes them (except maybe doctors). But having spent several days at the hospital this last week witnessing the birth of my son, I realize there are parts of a hospital that aren't tinged with the despair of illness. It's hard not to be uplifted when you are on the floor with the Maternity Ward.

Of course, I was buoyed with the optimism of my son's birth and the enthusiasm of my 22-month old daughter as we walked the hallways of the small maternity floor at Stevens Hospital in Edmonds, Washington. People couldn't help but smile as they looked at her beaming face and her "Big Sister" t-shirt. It was one of those hallways that stretched in a circle around the floor passing 13 birthing suites, a nursery and a small operating room where c-sections were done (and my son was born).

We walked the halls for several reasons. One, EM, like most toddlers, has a short attention span and a long need for stimulation. Much as she craved her mother's presence, she needed movement. The other reason was for both of us to get out of the way during the seemingly constant influx of nurses, doctors, dietitians, lactation specialists, and photographers.

They were short laps for me, but I'm sure they were pretty challenging for EM. She didn't seem to find any of it boring. I resorted to reading the plethora of signs on everything. One door was labeled: THIS DOOR MUST REMAIN CLOSED AT ALL TIMES. I mused at the oxymoron. What is the purpose of a door that should never be opened.

EM always took a detour when we passed the waiting area near the front desk to peer into an aquarium that had very few "fishies." Still, ever the optimist, she watched and babbled at the ones that peered back at her from behind fake coral and mock pirate ships. Then we'd wave goodbye and continue our rounds.
We passed several pregnant women and their dutiful husbands and dazed looking husbands walking in the opposite direction. I resisted the urge to call out, "Pregnant woman walking" every time we passed one. Discretion is the better part of humor, especially when in a Maternity Ward.

But it was when we'd pass the nursery that I'd be filled with a strong sense of the importance of where we were in the hospital. This was where the journey began for hundreds of babies a year. This was the center of life. I could feel the positive energy. I could feel the sensations of my daughters small hand clutching mine as she soaked in the newness of everything and I could only imagine the flood of sensations that were washing over my newborn son back in my wife's room.

As we rounded the corner and returned to mom and brother, I let EM run screaming to mommy. I went to my son's crib and reached for his hand. He clutched it and confirmed my new perspective on life.
Posted by Time at 4:42 PM

I don't think there is anything in life more wondrous than the birth of a child. Imagine seeing that on a daily basis...somehow I don't think you would ever get tired of it.

I sensed that about some of the better nurses felt that way. Some of the less stellar ones seemed immune to it and acted as if they were just doing a job. Sad.

When my wife had our little girl I didn't really have attention left to pick up on the so called "miracle of childbirth." I was too focused on my job as husband, birthing coach, new father and two feet made sore from standing the better part of 30 hours in a bad choice of footwear.

Here you are looking down into a clear acrylic bin containing this helpless little critter not even able get both eyes to look in the same direction, wearing a tiny doll sized diaper and hollering out these oddly quiet cries that make your heart grind against your ribcage in compassion. There's nothing like the feeling you get when you lean over and offer comfort, love and welcome to your newborn and it takes.

I agree about the nurses.