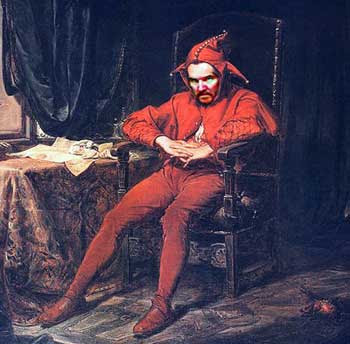 A new character on Desperate Housewives (Edie's new husband) was trying to convince the harpy-like wife of the guy who used to play on Melrose Place to let him be in a garage band. He did so by describing a man in mid-life suddenly coping with the realization that you had accomplished all you really ever were going to accomplish. You would never climb a mountain, win a marathon, write a great novel or achieve any real level of fame.

I just want to say to the writers of that show, "Thanks for crapping in my cereal bowl.

It is difficult to believe that it isn't true that middle age is the long slide into oblivion. Oh sure, you can all cite examples of people who accomplished great things after they turned 50, but let's be a little realistic here. Most of those people had some pretty established early years helped by trust funds to launch their golden age Renaissance. The rest of us pretty much spend most of our youth clawing our way to the top of the hill only to discover another hill and then say screw it.

Call me a pessimist. Many have. Some think of me as overly negative. I prefer to think of myself as arriving at a realistic point of view. I don't always expect the worst. I just am rarely surprised when it comes knocking.

It's not that I think life is over when you hit 40 or 50. After all, I didn't get married until I was 47. Our daughter came into my life when I was 48 and my son was born a few months after I turned 50. So I don't buy into the myths about the limits of middle age from an emotional and intellectual standpoint.

What I do buy into are the realities. You can work out all you like and eat relatively well, but unless you are Jack LeLanne, your body will change. You will gain weight, you will lose muscle strength and you will lose the flexibility you had in your 20s and 30s.

Face it, we all age. Look at the "Where they are now" Web pages and marvel at what the ravages of time have done to sex symbols, movie stars and athletes. It's entertaining for most people, but not quite as entertaining when you look in the mirror and see it happening to you.

It is the perceptions of you other people have as you age that are the biggest challenge. I've written several times about the phenomenon of becoming invisible as you age. The older you are, the less relevance you seem to have to the world unless it is to "honor" you for your contributions and then shuttle you off into the corner while the young people party.

I try to be conscious of the things that used to annoy me when I was in my 20s and 30s about middle aged people. I try not to talk to much about how we used to do things. I don't give advice (let them learn the hard way too...no one listens anyway). I don't berate people if they don't have the same foundation of popular culture I have from growing up in the 60s and 70s. I don't wear clothing that was popular when I was 25 or clothing that is trendy with people who are 25 now. I have become more and more aware that things that I thought made me unique and creatively quirky when I was young don't translate well into middle age. The best I can hope for is to be thought of as eccentric as opposed to addled and senile.

Although I was never considered sexy or handsome in the traditional sense, I still find it difficult to accept that I've traded in my pheromones for comfortable shoes and sweat pants. It's part of that being invisible thing. Though for the most part, I don't miss raging hormones. I think more clearly and I make better decisions.

I suppose being middle aged isn't that bad. It is what it is. It could be worse. It could be the Dark Ages.
Posted by Time at 12:40 PM

I too am trying to come to terms with the middle ages ... and what I've decided is that I will take the good and ignore the bad. I know a few people to whom you will never be invisible - EM & Roan (at least not until they become teenagers!) JP/deb

Nice thought. But I still tend to be invisible to EM when the Wiggles are on and to Roan when mom is in the room :)

well, given that the alternative is the Big GoodNight, maybe middle age isn't so bad.