Queen for a day 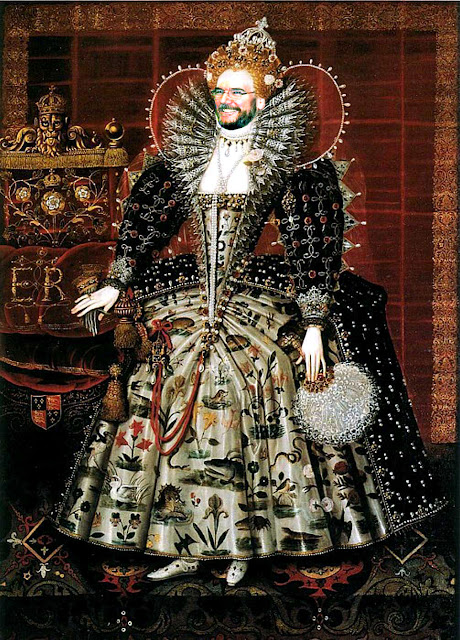 I suppose Photoshopping my face on Queen Elizabeth's

body and calling this post "Queen for the Day" could be misconstrued by some people. I have never really had any burning desire to dress up in women's clothing even in the privacy of my own home...not that there is anything wrong with it even if it is a bit bizarre and not accepted by a majority of white bread society (or vanilla society if you want to dredge up old sore subjects...its a long story from another blog post).

And no the man with his face Photoshopped on a Queen's body isn't protesting too much. For some reason, it just cracks me up. Besides, using Photoshop saves me the trouble of having to wear a corset and squeezing into those shoes.

I have never really accepted the concept of royalty anyway, queen or king (and I've Photoshopped my face on my share of kings so there). With the exception of Republicans and stupid people (a redundancy, I know), I pretty much believe everyone is more or less equal if not equally well mannered.

I find it ironic that Americans, people raised in a country that rebelled against the aristocracy, gets all ga-ga about royalty. We spout rhetoric about everyone being equal yet we elevate our elected officials and celebrities to royalty status because we just can't shake our peasant ancestry.

It cracks me up that the royalty in ancient Egypt brought about their downfall by so much inbreeding to protect the royal bloodlines that they eventually could only produce royal progeny that could play banjos in Arkansas. Hollywood celebrities should pay particular attention to this lesson from history.

I suppose everyone harbors this secret (or not so secret) desire to be the one who must be obeyed. I march up and down the hallways where I work mumbling, "Make it so" and "You're fired, get the hell out of Graceland" all the time. No one pays any attention to me.

Perhaps if I came to work dressed like Queen Elizabeth, they would pay more attention.
Posted by Time at 9:43 PM