In god particle's we trust 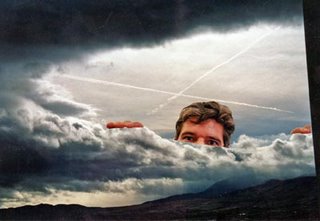 A headline caught my eye the other day online: ‘God particle’: Scientists close in on evidence of Higgs Boson existence. Apparently, the Higgs boson particle, named after U.K. physicist Peter Higgs, was created at the beginning of the universe and in theory allows other particles to have mass (substance, not a religious ceremony...though you would think a god particle would be open to the whole mass concept).

According to the article in the Washington Post, Scientists at the European Organization for Nuclear Research have narrowed where the particle can be found and hope to eventually prove that it exists so it will no longer be the equivalent of the Tooth Fairy to physicists. Apparently the hints found in their research could lead to proof of the god particle's existence by next October (which could very well coincide with another doomsday prediction of religious nut job Harold Camping).

Apparently,  finding the Higgs Boson would be the "discovery of the century" in particle physics, a "never-before-seen subatomic particle long thought to be a fundamental building block of the universe." I wonder if the first scientist to actually discover the particle will be surrounded with news cameras and be asked what he or she will do next. I kind of hope they'll say, "I'm going to Disneyland!"

I doubt this will happen, because I don't get the sense physicists have much in the way of senses of humor. Regardless, I'm not certain what discovering the god particle will mean other than confirming the basic principles of standard particle theory (I know I've been losing sleep over this). A more interesting question is what it would mean if scientists determine that the particle doesn't exist after building a $10 billion dollar lab to find it. I imagine their response at that point will be, "that sucks." That would be my response.
Posted by Time at 3:27 PM

Shameless plugs to guestbook visitors: Thanks so much! Tim-Elvis Fine Sequined God, Thanks for the info.

It's all over for the higgs-boson. Never was , has been, will be found. It don. 't fit the Unified model or even the Higgs private Idaho. Go with the "mass effect" or make up your own alternative. Happy is the day the Higgs-boson got NOT. So it goes...

So you are saying they will never find god? I'll have to tell my brother. He says he has found Jesus. So maybe Jesus knows where god is hanging out. :)