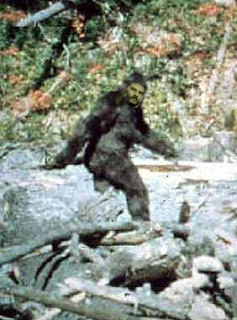 I thought about calling this post, "Does a Yeti shit in the woods?" but I decided to take the high road and call it "Taking crap from Yeti." Regardless, it was inspired by a program I watched while on the elliptical machine at the gym the other day.

The program was "Mysteries at the museum" on the Travel Channel. The segment was about the International Cryptozoology Museum's Yeti scat sample. Apparently, Cryptozoologist Tom Slick (I kid you not) watched a Yeti take a dump in the foothills of Nepal in 1959 and picked up the Yeti-doo to prove Yeti's exist.

For some cryptic reason, the "International" Cryptozoology Museum is located in Portland, Maine. And in case you aren't clear on what Cryptozoology is, it is the study of animals or creatures who most people don't think exist, like Bigfoot, Yeti and a man who doesn't pee on the toilet seat.

I doubt Tom Slick considered himself  a Cryptozoologist. He was the wealthy son of a Texas millionaire and hung out with people like Howard Hughes. He went to Yale (which apparently doesn't really mean squat when it comes to higher education if you consider George W. went there too).

In addition to having lots of money and having a reputation of being a playboy, Slick also liked to lead expeditions looking for mythical creatures like Bigfoot, the Loch Ness Monster, Yeti and the Trinity Alps giant salamander (an alligator sized salamander reportedly living in Northern California). It was on one such expedition that Slick spied on an unsuspecting Yeti relieving itself, and, as the startled (and somewhat embarrassed) creature ran off, Slick swooped in to scoop its poop.

Slick shipped the poop off to a lab in Paris and had it analyzed to try and prove it was Yeti poop. Sure enough, the lab confirmed that the sample Slick sent them was indeed poop. They just couldn't say whose poop it was. They did discover a parasite in the poop, so one could conclude thatYeti would benefit from a few de-worming tablets.

What the Travel Channel didn't dwell on in the Mysteries at the museum episode was how the Yeti poop ended up in Portland, Maine near displays of Jackalopes and models of the Loch Ness monster. I'd wager someone bought the poop on eBay (although I did a search on eBay for Yeti poop and could only find a listing for fake Yeti/Bigfoot poop for $29).

The bigger question in all of this is not whether Yeti exists, but why so many people put so much energy into trying to prove it. If these creatures exist, they obviously don't want anything to do with people. Because the likely outcome of contact with people would be being locked up in a cage or killed and stuffed. I wouldn't want anything to do with a species that spies on you when you are taking a dump and then swoops in an puts your poop into a bag (not unlike most dog owners).

Perhaps it is because I am on the downward slope of my life's journey, but I have become more and more particular about my priorities in life. Chasing after Yeti's or Bigfoot is not one of them. Nor is gazing at Yeti poop in a museum (though I did spend 30 minutes watching a program about it). I don't want to be lying on my death bed recapping my life's accomplishments and shake my head wondering why I scooped up a pile of Yeti poop and thought that had significance.

Instead I can marvel that I wrote an unread blog dealing with burning topics like why clams are happy and explorers picking up Yeti poop.