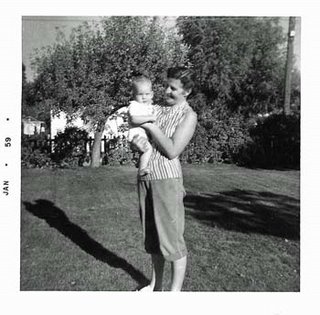 All of the memorial services I've been too in the past year have made me think a lot about our life stories. When you think about it, life is basically the sum total of our little stories stitched together. We can only hope that there is something truly interesting in there that makes it worth remembering (our life, I mean).

Unless you are historically famous like George Washington or the object of crazed fans like Elvis, no one really knows your entire life story (or particularly wants to). I don't imagine most people even recall most of their own life's story. And if they do, I don't imagine it really happened completely like they remember it.

There was a point I went back to Boise intent on recording my mom's life story while she was still alive to tell it. But I waited too long. All I got were bits and pieces of random stuff from her childhood, most of it not very pleasant. So when it came time to writing her memorial after she died, there wasn't much I could really tell other than she had come from a family of 13 kids and that she had married my father and had three boys of which I was the youngest.

At the time, I wasn't emotionally ready to piece together all of the stories I recalled on my own as a boy listening to my parents talk on long vacation drives and around camp fires on summer nights camping out. Or sitting in our old Chevy waiting for my father and brothers to return from fishing as I sat with my mother as she read her Science and Health with Key to the Scriptures by Mary Baker Eddy. Occasionally she'd talk about some story from her life.

I knew she worked as a telephone operator in the late 40s and connected a call to her mother's phone when her brother died in a small plane crash. I knew she later worked in a bank, operating a 10-key business machine. I knew she lived in a small apartment when she met my father. And I knew she moved into his mother's house after they married while they waited for their house to be built in the lot next door.

I know my mother stayed home taking care of her children until I was in grade school. Then she got a job as a kitchen helper in a school cafeteria (which is ironic because she hated to cook). I know the job required that she get to work very early in the morning before I went to school and that I would often get myself ready and walk to school after both my parents left for work.

I know my mother cleaned houses with her mother for awhile to earn extra money. And she worked for many years at a place called Sioux Veneer Panel Company, operating a machine that glued vinyl onto batons that were used to cover the seams of vinyl panels used in mobile homes. They called the woman who worked on the machines "bat" girls. I worked with her one weekend when the factory had a big order and needed extra help. It was nasty, monotonous work.

The last job I know my mother had was working at a drive through dairy/convenience store called Sun Ray Dairy. That would have been in the mid 70s because I remember buying a couple of complete boxes of Star Wars trading cards from her wholesale.

Then my mother retired. But she never really stopped working. She loved yard work. And she hated dirt so she was constantly cleaning. We'd be walking out the door to go out to eat and my mother would decide at that moment to vacuum the floor. This would drive my father crazy, because he was always in a hurry, especially when it involved eating. So he would be in the car fuming while my mom attacked dust bunnies in the living room.

I don't recall my mother ever having a hobby, though. She used to sew a bit.  I remember her making us pajamas when I was younger. But she only sewed out of necessity.

It was the same with cooking. She didn't like cooking and she made it clear to us every night at dinner time. Meals were simple. I remember fried pork chops, meat loaf, plenty of potatoes, canned vegetables and Salisbury Steak (another word for hamburger). There was spaghetti too. Or macaroni and cheese. If she had the energy she would try something new like Spanish rice or Beef Stroganoff.

Most of the lunches I remember as a kid came from a can (Campbell's Soup, Chef Boyardee and SpaghettiO's). And we ate lots of Velveeta Cheese sandwiches as well as bologna and pimento loaf (an odd variety of sandwich meat). On Sunday's we'd often have Swiss Steak (a recipe used to hide cheap cuts of beef). In the summer we'd grill hamburgers or hot dogs.

Bottom line was, my mom wasn't one of those people who was trying new recipes or into exotic cooking. But she was particular about cleaning up after cooking. One of my chores was washing dishes. We didn't have a dishwasher, so everything had to be washed and dried by hand. I wasn't particularly fond of washing dishes, especially the greasy pots and pans. One reason I didn't like washing dishes was that no matter how hard I'd wash or scrub, my mother would manage to find something I'd missed and rewash it. Even when we eventually got a dishwasher, she still insisted on washing the dirty dishes before loading them in the dishwasher.

Though one thing did come from my years of hand washing dishes. I have a phobia about a sink full of dirty dishes.

When mom wasn't working on something, she was reading her Christian Science literature. She hadn't really been exposed to religion growing up. But after marrying my dad, his mother (a Catholic turned Christian Scientist) introduced her to the religion and for some reason it resonated with her. She kept her faith up until the end, though having been with her in her last moments, I can't say it gave her much peace.

To me growing up Christian Scientist simply meant I had to get up early on Sunday to make it to Sunday School. And it meant I stuck out like a sore thumb at school when other kids were forced to take hearing tests and eye tests at the school nurse and I was excused because of my religion. And other kids got to take aspirin for their aches and pains while I simply had to suffer and pray it out.