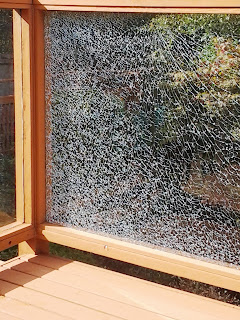 It was one of those random things in life that you can't really explain. There didn't appear to be any impact point on the glass that would indicate someone had thrown a rock at it or shot it with a pellet gun. Nor were there any feathers scattered around to suggest that a bird had flown into it. It, like so many postal workers before it, cracked from some unseen pressure and fell to pieces.

I threw down some cardboard and garbage bags to try and contain as much of the pieces as possible. But even with me breaking as much as possible inward, about half of the thing shotgunned on the walk below that is surrounded by ground cover. On the positive side, I think it was safety glass, so rather than shattering into deadly shards, it cracked into little pellets.

It was those pellets I spent hours picking up when the rain threatened. Fortunately I was able to finish picking up most of the pieces without an actual deluge ever materializing. I imagine I will discover any pieces I missed the next time I forget about them a walk barefoot down the path to the lower deck. I just hope it is me who discovers them and not my children.

Although baffled by the random shattered of the glass, I am fortunate that I live in the modern age and can at least attribute it to something like stress from heat and cold over the years. I imagine there would have been a time when I attributed it to vindictive spirits.

Though it did go through my mind. I have been watching the entire first season of My Ghost Story on Amazon Prime. So when I snapped some photos of the glass I half expected to see the face of some spirit (or the mountain beaver) peering at me with menacing eyes. Or at the very least, an orb. Though I'm not sold on the whole orb thing being a photo of a spirit. I think most orbs are just spectral dust bunnies or reflections from the flash.

On one episode of My Ghost Story this guy with a shaved head and really bad teeth was convinced he was possessed by demons that looked like pigs with horns. He kept waving around a photo that he claimed was one of the devil pigs. I never could see the pig and I think the guy's dart board was missing a bullseye if you catch my drift.

I have noticed a pattern in these ghost stories. A good portion of the people who claim to have experienced hauntings have really bad teeth and were absent the day good looks were being distributed. Most seem to have been spawned in the shallow end of the gene pool as well. So perhaps low functioning people are lightening rods for spirits.

Not that I have any particular desire to appear on My Ghost Story. As near as I can figure, having a ghost in your house is not unlike having an unemployed inlaw dropping in for a visit of uncertain duration. In either case you run around yelling, "Walk into the light" and just want them to move on.

It's looking pretty cloudy outside though and wait, I see an orb! 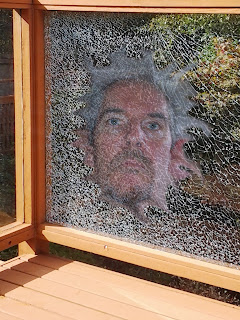 That has to be one of your best posts ever (or for some time)...I was going to share my glass shattering experience, but then you digressed to bad teeth. Now the bite's gone and I'm left with just the 'pane'.

Baggy, I do love puns. I'm ashamed I wasn't able to work in something about broken glass being a real pane.

Anyway, brilliant writing as usual. My grandmother would have slaughtered a chicken to keep the glass shattering spirits in check.

Mickey! Always a pleasant surprise when you comment. I assumed the spirit moved you...ha, ha, ha.

I did grill some chicken just in case. I kind of like the deck without the glass panel anyway. It gives you a great view without having to clean anything. But then again it opens the possible to people and pets popping through it.