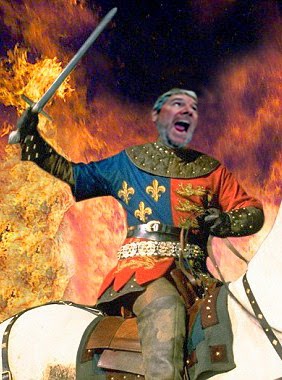 Not that I really have any relevant points to make. I just felt like posting after I realized this morning that I'm just a couple of months away from the ten-year anniversary of my first post. And let me tell you that a decade in the blog world makes dog years pale in comparison. I know of no other bloggers in my very narrow world who have blogged for ten years.

Who would have thought when I started writing my blog ten years ago that I'd still be blogging and have 27 followers and 23 people like my blog on Facebook. Who would have thought there would be something like Facebook? I definitely would never have thought there would be something like Twitter. Or Pinterist (which I still haven't figured out). And don't get me started on Get Glue, especially now that they stopped sending you stickers. Not that I saw any real reason to get stickers for watching television. Though they were free.

I am a bit bitter about never having made Bloggers "Blogs of Note" list. Apparently you have to post consistently about one topic in order to be noteworthy.

Lord knows I've tried. But I don't really have any hobbies to blog about. And honestly, I couldn't write about the same thing all the time without getting horribly bored. It's also why I don't write on a daily basis and I tend to shy away from writing about my day to day life. Mainly because my day to day life wouldn't win me any Pulitzers either. Even my kids glaze over when my wife asks them at the dinner table, "Did anyone ask Daddy what he did today at work?" I mean there aren't too many ways to glamorize going to meetings and reading e-mails. Oh and signing things. That can be pretty interesting. And I did get my teeth cleaned this morning.

I used to try and philosophize more. But it is hard to be profound on demand. And I don't think I could take the pressure of being a cult leader anyway. People expect you to be able to predict the end of the world and explain things like why The Brady Bunch was so popular. Though like all boys growing up in that era, I had a crush on Marsha.

Oh god, I'm rambling. Where was that breach anyway?