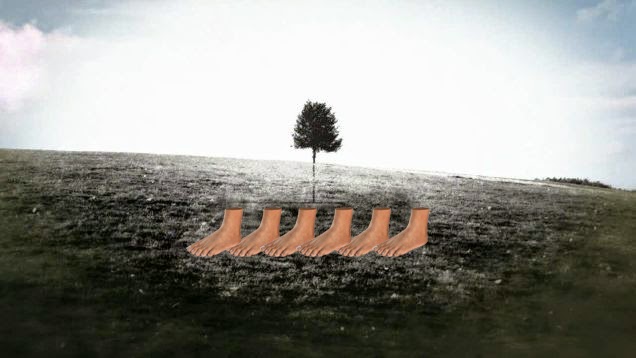 The concept that maybe great art may be more a product of accident then design was posed on my latest binge-watching obsession, Six Feet Under. If you are not familiar with Six Feet Under, you should be. It's far better than just about anything on television today. Regardless, it is an HBO series that ran for five seasons beginning in 2001. It is the story of the Fisher family and their funeral home. It is also the story of life, death and love (not necessarily in that order).

Anyway, 18-year old Claire Fisher (played by Lauren Ambrose), posits her theory about accidental art as she struggles with self-doubt in her first year of art school under the tutelage her sadistic art teacher (who is having sex with her brother's ex-fiances mother and her boyfriend...no wonder Claire is confused). The line about maybe great art being an accident struck me as profound and kudos to whomever the writer was that wrote it for troubled teen Claire to utter.


I believe that great art and literature, if not accidental, is also not deliberate. One could argue that great technique is deliberate and develops after much practice, but great technique doesn't necessarily translate to great art. You can be taught technique, but you can't be taught talent. I also think that if you try to be great, you generally aren't (it's that talent thing again).

Part of the problem with art in general is that I think it is pretty subjective as to what constitutes great art. I have stood in many a museum and stared at what experts deem great art wondering what is wrong with me that I can't see it.

And no, I'm not one of those "why is that art, my 5-year old can paint better than that" kind of people. Art is what moves you. So I don't dismiss art just because I don't get it. But I also don't value it just because someone tells me it is great. Art should be an emotional investment, not a financial one.

Besides, I don't think a great artist ever really knows they are great. Van Gogh is one of my favorites and he hadn't a clue how great his work was. No one seemed to know how great he was until long after he shot himself in the chest and died.

John Kennedy Toole's novel Confederacy of Dunces was published 11 years after he committed suicide (by running a garden hose from his car exhaust pipe into the window of his car) and won the Pulitzer Prize.

I'm sensing a pattern here. I'd like my art to be appreciated, but I don't think it's worth cutting off part of my ear, shooting myself in the chest or sucking on a hose of carbon monoxide. Call me crazy that way.

Maybe I'll change my Twitter alias and blog title to Accidental Artist and see if that helps.