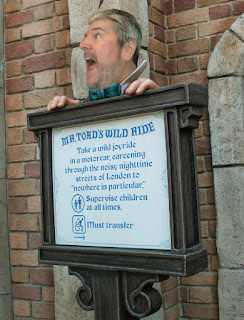 I survived the awesomest place on earth (Legoland) and the happiest place on earth (Disneyland). Two days in Legoland followed by three in Disneyland is not something I would necessarily recommend to anyone. Both places are better parsed out in small doses. There is only so much of being herded into 45 minute lines that anyone should be subjected to.

But I did it all for my kids. Not that they expressed a great deal of delight in the overall experience. I only hope they don't repay the favor by dragging me back to the theme parks with their families in my twilight years. We got stuck behind more than one person in a walker or wheelchair barely looking as though they could navigate a sidewalk, not to mention the Matterhorn.

I do think this is the first trip I've taken to Disneyland since I was 16 that the Matterhorn was actually running. Being one of the original rides, it always seemed to be closed for repairs. But it was working fine this trip and my kids insisted on riding it three or four times.

Ironically, my favorite ride, the Haunted Mansion, was closed so Disney could redecorate it with their traditional "Nightmare before Christmas" holiday theme. Because nothing says Halloween and Christmas like a freaky ass Tim Burton set.

I did manage to ride the haunted Hollywood Hotel ride in California Adventure. Basically they strap you in a chair in a fake elevator and drop you and haul you back up in the dark several times. I will admit that I kept my eyes closed through most of it.

But the scariest part of theme parks are not the rides. The scariest part is the people. Disney used to hire semi attractive people to operate their attractions. Apparently equal opportunity lawsuits has forced them to open their doors and allow just about anyone to work their now. The stereotypical wholesome blonde California 20 somethings have been replaced by less Disney engineered looking people who more closely resemble the park clientele. And let's just say that the beautiful people don't seem to frequent Disneyland or Legoland.

What totally baffles me is how all of the people who go to Disneyland and Legoland (including myself) actually afford to go there. A two-day ticket for a family of four at Legoland runs you about $380. Stay in the Legoland Hotel for a couple of nights and add another $700. Then food in the park or hotel for a couple of days will run you another $300 minimum. Add another $30 for locker rentals at the water park. And you can't leave without buying the kids some souvenirs. That's at least $80. So you're in about $1500 for Legoland.

Let's not forget the $300 car rental cost plus gas to get from San Diego to Anaheim. Then a three-day park hopper ticket for the same family of four. That's about $1,100.  You can't visit Disneyland without the $70 Photopass to pay for all of those fun photos they take of you being happy. Add in $700 for four nights at a hotel (not a Disney hotel mind you). Throw in some character meals and a meal at the Blue Bayou Restaurant. That's about $250. Other meals at the park or around the hotel will run you at least another $400. And let's add at least another $100 for the Disneyland souvenirs, because you know you are going want to wear those mouse ears once you leave the park. Don't forget the shuttle from your hotel to the park. That's $50 bucks for three visits. That's another $3000 for Disneyland.

I won't even go into airfare, airport parking, and the kennel fee for the dog. 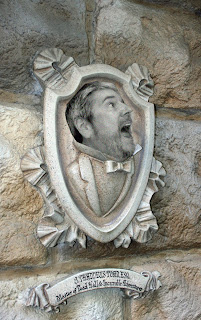 Somebody let me off this ride. I need a vacation.

Those places would be my idea of hell. My inner child does not want to be released. Not never.