Maybe it really isn't so great being great. 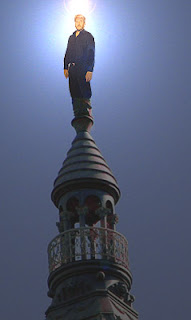 Despite being admonished by a barfly in a tavern in St. Thomas many years ago to remember seven words to live by (Never...forget...how...great...you...really...are), I am coming to the conclusion that I'll never be great or great at anything. This is not a festive pity party, just an observation.

Maybe it was inspired by watching one of those motivational videos that goes viral ever now and then on Facebook. It cleverly tells the story of all these famous "great" people who failed or were told they were failures but eventually they became "great." The list included Lucille Ball, The Beatles, Michael Jordan, Ulysses S. Grant, Thomas Edison, Walt Disney, and Abraham Lincoln.

I know this is supposed to give me hope that it is never too late to be great, but I would argue here that Lucille Ball is not really my definition of a great actress. I Love Lucy was popular at the time because it was one of the few television shows available at the time. Let's face it, Lucy eventually got on everyone's nerves and was major league bitchy in her golden years.


Ulysses S. Grant is said to have loved the bottle a bit too much and is not really remembered for his military prowess. He just happened to be one of the few generals left for Lincoln to appoint to run the army at the time. He became a viable candidate for president because he was considered a war hero and was very recognizable. I can't think of anything memorable about his presidency.

Thomas Edison did perfect the light bulb after hundreds of failed attempts. One could say that even a blind squirrel finds a nut every now and then. And he did electrocute a circus elephant that had killed one of its handlers at one point to show how useful electricity could be. I don't think that is very great.

I think Walt Disney was actually more successful after he died. And since I am still paying off our recent trip to Disneyland, I'm not feeling the love for the father of the happiest place on earth.

I'm not big on basketball and I'm sure Michael Jordan was quite the player. But the man is starring in Hanes underwear commercials. That's all I'm going to say.

This leaves Abraham Lincoln and the Beatles. I'm a major fan of both. But both Lincoln and lead Beatle John Lennon ended up getting shot.

So maybe it really isn't so great being great.