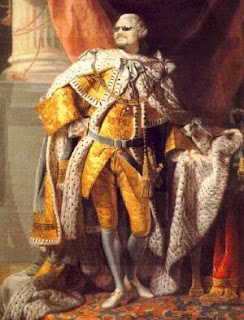 I survived the Ides of March without nary an attempted assassination by the Roman Senate. I toyed with ordering a Caesar salad at the local diner last night and saying, "Etu Flo," when it was served, but I decided not to tempt fate.

It is now March 16th, a day of no particular note other than it is one day before St. Patrick's Day. Yet I still feel the slight bit of anxiety I've alluded to that comes with every birthday. Part of it is likely due to the bulging spot that appeared on our basement ceiling on Sunday indicating something, somewhere was leaking. My wife poked it with a paint scrapper this morning and apparently a large chunk of the ceiling fell down.

So the Ides of March did bring a small disaster after all and Chicken Little has been vindicated. The sky...and my ceiling is falling.


I do get a bit tired of the roller coaster nature of life. It had been awhile since we'd had a problem with the house. Oh, the dishwasher did leak a bit a few weeks ago but it was quickly (if not cheaply) remedied by a plumber. But the last major problem we had was a couple of years ago when our French drain backed up and flooded several rooms of the same basement. This led to major drywall and carpet replacement followed by a major asbestos-removal effort on the ceilings (including the same ceiling that is now falling down).

Before that it was a new retaining wall to prevent our deck from sliding into the creek below our house. Water seems to be a common thread in problems with this house. This might have something to do with raining a good portion of the time in the Pacific Northwest.

God knows what's leaking now. Whatever it is, it apparently decided I had too much money in the bank and I need to blow some on plumbers and contractors.

Ides hope this is the last of the Ides I have to beware of.