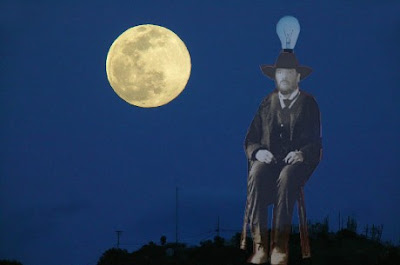 I was listening to a TED podcast (TED stands for Technology, Entertainment and Design) the other day on original thought. The basic premise was that there really was no such thing. All of our art, music, literature, movies and inventions are derivative of things that others had already thought of. We, as a species, don't create. We tinker and add on to things.

This fits with my posts about Googling great ideas I've had only to discover three million other people have already had them. Apparently, the Big Bang (not the television series) was the only original thing that has ever happened in the universe.

None of this really surprises me. I've always believed in collective consciousness. It seems that we are born with certain inherited knowledge. It is kind of a psychic evolution. It makes sense. How else would a species survive unless knowledge of how to survive was passed along to the next generation even if you were unable to verbally do so before you died.

The TED talk postures that unoriginal thought isn't a bad thing. By layering on what someone else has already worked on, you generally keep the best part of it and add something to make it even better. Or at least in theory. There is still something sound about the saying, "If it ain't broke, don't fix it."

The whole concept that nothing is original kind of makes my creative side throw up a little in its mouth (if a creative side has a mouth). I've always prided myself on being unique. Finding out I'm just creating a variation on a theme along with millions of others is kind of discouraging.

Not that people truly want original things (i.e. different). Seems like most people crave the familiar (which is why McDonald's are the same everywhere).

It just dawned on me that this post isn't even an original idea since I based it on a TED podcast about original thought.