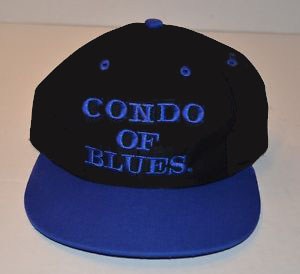 "House of Blues" has been franchised, so I thought I'd think smaller and go for "Condo of Blues." It seems more suburban and middle class anyway.

"Condo of Blues" was inspired when I put on my House of Blues cap this morning and thought of the irony that I'd purchased it at the House of Blues in Downtown Disney in Anaheim. Because nothing says the blues like Orange County (though apparently the one in Downtown Disney has closed and is moving to the Garden Walk a few blocks away). Oh, I've been to House of Blues in New Orleans, too. But still, it is a franchise bent on serving up the blues in a nicely packaged way for mainly white tourists.

But being being white, aren't we all tourists when it comes to the blues?


I chose my House of Blues cap because I have been feeling a bit down lately. And I didn't want to wear my Legoland cap because the last time I wore it a clerk stared at it and asked me if I'd taken my grandchildren to Legoland. I told her no, I took my children there. My 7-year old and 9-year old children. She stared at me skeptically.

So I'm hunkering down in my condo of blues moping about people thinking I'm a grandfather and the state of inhumanity in the world. It is hard to be optimistic in a world where owning an assault rifle is a god-given right even after San Bernardino and Orlando. And then there is Trump.

Although I'm not a grandfather, I am old enough to know that even though it seems the world is going crazy, it doesn't necessarily mean that things were better in the "good 'ol days." Every time period has it's craziness and senseless violence. Social media and the Internet just make it more readily apparent.

I just wish the media and the Twitterites would stop glorifying killers, bigots and terrorists by giving them endless publicity.  Mass murderers and demagogues like Trump should be purged from history, not immortalized in it. Every vestige of their existence should be eliminated so they are reduced to the true insignificant thing that they are.

What right do murderers and assassins have to be remembered in the same breath as their victims? By making them famous we only create future monsters who want that same flash of fame.

I guess I'll just retreat into my Condo of Blues now and hope they don't raise the homeowner's dues.
Posted by Time at 4:42 PM

We have to stay strong and stand together.