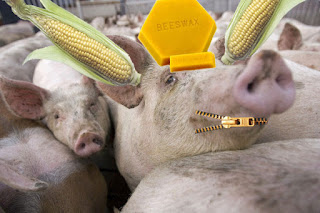 
The Texas legislature tried reducing the hog population by authorizing hog hunting from helicopters. A company called Helibacon cropped up and as many as 27,000 feral hogs are dispatched by hunters in helicopters each year. But that is just a drop in the slop bucket of hogs, so the Texas Agriculture Commissioner has authorized use of the pesticide, Kaput Feral Hog Lure. It will be used as bait food laced with warfarin which is the same drug used to kill rats.

Apparently It can also be prescribed by doctors, in smaller doses, to prevent blood clots (I assume in humans and not feral hogs).

At least 1,200 hunters and the Texas Hog Hunter's Association (yes there is such a thing) have signed a petition opposing using poison to control the feral hogs. It is unclear how many of the feral hogs have signed, but I imagine most of them don't like the idea either. The hunters don't like the idea of potentially shooting a hog that is laced with rat poison (even if eating it helps reduce blood clotting). The feral hogs also find the name "Kaput Feral Hog Lure" offensive.

The Texas Agriculture Commission has countered that if the state uses the poison  the department would no longer need $900,000 earmarked for feral hog control research.

Is it just me, or is that a lot of money for feral hog control research? I personally think poisoning the hogs is a stupid idea. Someone just needs to convince Trump that the hogs came from Mexico illegally and the Texas National Guard would be rounding them up and shipping them over the border post haste.