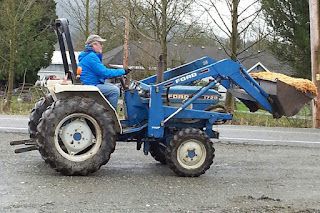 I didn't post on my birthday as is my usual custom. Generally I get a bit down around then because birthdays have usually been a let down for me. But this year I was treated to a farm stay at a working farm in Sedro Woolley, Washington and it made me forget about me pushing 60.

I won't go into too many details since I posted more about it on my daddy blog.  But suffice it to say I had a blast just feeding cows and driving tractors. It was simple. It was good, hard work. And none of it involved a committee or an hour and a half meeting.

One of the cool things about the farm was that the owner bought it about eight years ago when he was the age I am now. He was this vibrant, smart guy who was patient and full of life. And he made me think about the direction of my life.


Now I doubt I could truly pick up and buy a farm and run it. I could probably learn much of what is involved. I imagine I could manage chickens and even a few goats and pigs. But I don't think I could stomach raising cattle to be slaughtered. I also don't think I could raise crops past a small garden. And as fun as driving a tractor is, I'm not mechanically inclined. So most of the machinery required to run a farm would need to be maintained by someone else.

I imagine this fantasy of being a farmer is like many things in my life. The reality of it would quickly sink in if I actually did it. Playing at being a farmer is one thing. Doing it every day for the rest of your life is another.

Part of it too is the reality of aging. I'm active now. But I've noticed the slowing down. I sit on the floor playing with my kids or dog and I don't just spring up off the floor. So the thought of lifting hay bales and working in a field when I'm 70 or so starts to get dicey.

I do know I need to do something when I retire. I've just never really thought about it. I started working when I was 10 with a paper route. I also mowed lawns, weeded gardens and other odd jobs. I started part-time work in earnest when I was 16. At one point during college I was working two jobs for 64 hours a week and taking a full load of classes. The only time I've not worked is right after graduating from college. I was unemployed about a month. But then I got a temp gig that turned into full time employment. I've been working steady for 35 years.

In theory, I've got ten more years to work. My youngest child will be starting college by then. I'll be 69. My father died at age 76. My mother was 88. If I average out those, I might live until I'm 82. That gives me about 13 years before I die.

That's a cheery thought. I will have worked 45 years of my life and I'll have 13 years to think about it in retirement. And this assumes I'll hold onto my health and my mind. Maybe a farm isn't such a bad idea. 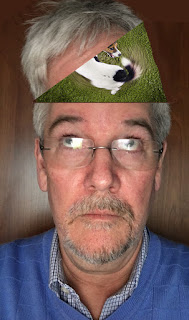 See how the dog that is my mind chases its own tail a great deal?