All of those Day of the Dead skulls I painted on river rocks motivated me to clean off this derelict cement garden pig ornament that we had inherited when we bought our house and give him a new paint job. He had been hidden in some ivy. When we uncovered him, he'd lost most of his snout and his front hoofs. 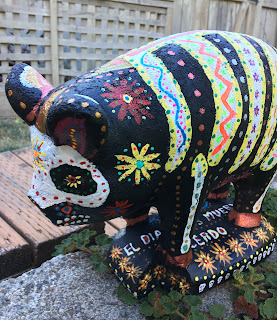 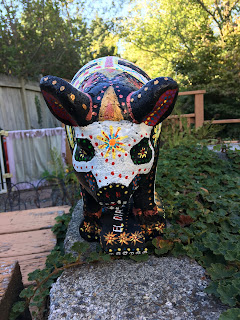 It was actually my daughter's idea. She also helped with the intricate paint scheme. I think he turned out pretty cool. So cool that I cleaned off a derelict garden gnome and I'm going to turn him into a Day of the Dead gnome next.

So beyond painting rocks and garden statues being relaxing, I realize it's not high art. But for a little while, it helps fulfill my need to be creative. I just need to remind myself to keep it all in perspective. Just because I like it, doesn't mean other people like it or understand it.


I've been down this path with my creative side before. Well, not the painting rocks and garden statues route, but the creative outlet side. When I was in high school I started making salt dough Christmas ornaments.  They were pretty cute and I got lots of positive feedback. So I made more and more of them. Then I started making dough people and attaching them to plaques and giving them as gifts. I was sure people loved them.

Several years later, after I  moved to Seattle I was visiting my hometown and decided to shop some thrift shops. I was rummaging through a bin and found one of the dough sculpture plaques I'd given someone as a gift years before. That drove home the point that not everyone was as fond of my art as I was. 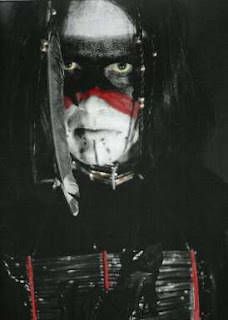 I also went through a phase of creating jewelry and power wands with quartz crystals and copper.  They had a kind of native American look.I wore them for a photo series I called "Urban Native."  I gave them as gifts as well. Never found one in a thrift store, but never saw them displayed at any friend's house either. Nor did my photo series ever get much attention. 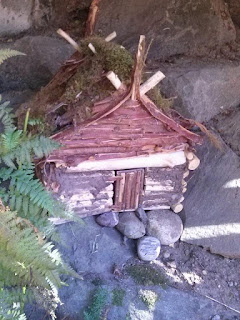 I built a miniature fairy house for my kids. It was made out of cedar branches, bark and moss a few years ago. It eventually fell apart. I put it back together last year, but no one seems to pay any attention to it and no fairies ever moved in.

In a way, my blog has been a long-term art project for me. It started as an Elvis website created as a lark to display my Photoshop and writing skills. The website actually got a fair bit of attention. It was featured in Parade Magazine one year. That was kind of a stroke to my ego. When the website morphed into my blog, I initially had a group of followers who further fed my ego by telling me how funny and clever my blog was.  They eventually fell by the wayside.  Apparently I wasn't as funny and clever as I thought.

It all comes down to the realization that art (including blogging) should never be done for other people. You should do it for the simple satisfaction of creating.  And god forbid you try to ever sell any of it. I suppose it was okay that I gave it as gifts. Perhaps some of the people enjoyed it for awhile.

Though I never did get over finding the dough sculpture in a bin at a thrift store. I would have preferred they just threw it away.
Posted by Time at 10:43 AM

Scary... but I will still look for the gnome.