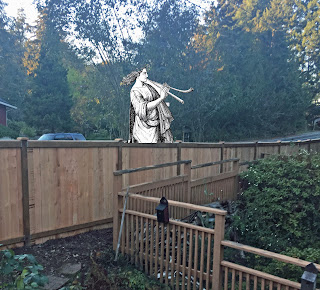 I could write about what must be my 12th visit to a pumpkin patch with my children and the $51 dollars worth of pumpkins I bought after paying $12 just to get in the place. For that price, my family and I were able to feed motley looking ducks and chickens and listen to rather large people taunting a mother pig for being so fat.

Or I suppose I could write about how I am probably one of the few 60 year olds who is obsessed with playing Fortnite. Though my son was marveling at the fact that he and I started playing the game at the same time and he is so much better at it than me. I don't think that is totally true.

I could also write about my Bengal cat keeping me up at night by continually flushing the toilet. If only she would also use the toilet instead of her cat box I wouldn't mind so much.

And there was my trip to the movie theater with my son to see the new Marvel movie Venom.  After paying $24 for the tickets online and another $27 for two sodas, a larger popcorn and a box of red vines I sat in the front row and struggled to actual see the film. The seats were recliners, however.

So instead of writing about those mundane subjects, I instead write about my missing muse.

I don't think I've ever seen so many $s in a blog post. Your muse is costing you on all levels!