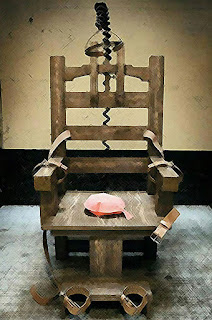 I watched a bad movie (The Last Laugh) the other night on Netflix starring a 75-year old Chevy Chase playing an even older ex-manager of comedians including one played by 71-year old Richard Dreyfuss. Dreyfuss looks like he is 85. It was your typical coming of old-age film that tries to instill faith that we still have it in us as we age. Chevy Chase hooks up with Andie MacDowell playing a swinging artist who had attended Woodstock. Thing is, actress MacDowell is the same age as me.

The film was pretty depressing. For one, it's audience demographic are people my age who know who the hell Chevy Chase, Richard Dreyfus and Andie MacDowell are and remembers what they looked like in their younger days.

I suppose I could start posting positive posts about how aging isn't really so bad. The thing is, there isn't a lot positive to say about aging except that you aren't led around by raging hormones anymore. I suppose that is something.


Aging also makes you think a great deal about your own mortality. I've touched on that in a blog post or two as well. I used to think my blog would be that thing that I left behind so I wouldn't be forgotten. Lately I've come to believe it doesn't really matter if I'm remembered or not. Because in the grand scheme of things it isn't important.

That was another thing the bad movie with Chevy Chase drove home to me. All of those actors were once household names and recognized by most people. Now they are just a vague memory in my generations fading minds.

Fame is fleeting like the rest of life. And in the digital age, fame means nothing. A million likes on a social media post means nothing 30-seconds later.  For example, my Amazon Alexa  suggested some story the other day about someone breaking the Guiness Book of World Records record for stacking cupcakes.  It occurred to me how pointless that would be to stake a claim to such a frivolous thing.

When I die, there won't be even a headstone. I'll be cremated. All of the accumulated clutter of my life, likely including my amazing collection of Elvis Christmas ornaments, will either be tossed or sold in the bargain bin at a thrift store. And my blog and all my blog posts will eventually be deleted from whatever server there is at the time.

But it doesn't matter. I'm not trying to be morbid, but I'm really coming to the conclusion that thing that really matters is what happens here and now. No one remembers yesterday. No one knows tomorrow. There is only now.

If only someone would have told me that 40 years ago.

And if only I would have listened.
Posted by Time at 9:57 AM