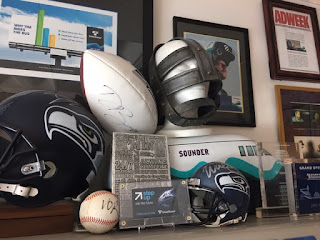 That describes most of my Elvis collection as well (including a limited edition Elvis themed Epiphone guitar).
I periodically get obsessed and buy quartz crystals. They are scattered around my office and some are on an end table near my easy chair in the television room.

After coming back from New Orleans I usually add to my collections of mardi gras beads and doubloons.

I also went through a brief phase of painting rocks and hiding them in different locations in my neighborhood. I got quite the kick out of it for awhile until I realized that no one but me was really impressed with my artistic abilities. 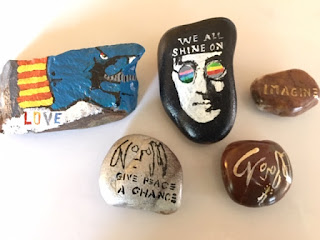 Mostly I collect clutter. After getting married and merging households years ago, most of my clutter ended up in Value Village or plastic bins in the garage. A great deal also ended up in my office at work. I add to it on a regular basis with souvenirs from ad shoots or sports memorabilia collected over the years. I'm moving to a new office at work in July and I'm not looking forward to packing. Lots of people comment that maybe it is time for me to clean house.

I get obsessive when I go to beaches and collect sea glass and tiny rocks that catch my attention. My daughter has picked up that habit as well.

I suppose collecting clutter isn't really a hobby. I am one of those people who has a hard time letting go of things. I a pretty sentimental. If one of my children gives me something they made or a picture they colored, I can't throw it away.

Sad thing is, antique malls and thrift stores are chock full of stuff someone couldn't let go of...until they died and their less than sentimental surviving family held an estate sale or simply called Goodwill.

I imagine when I retire it will be time to go through the massive amount of plastic bins in the garage that contain the clutter I couldn't quite part with as we moved from house to house.  Because I supposed it would be better for my children for me to throw it all out than them.