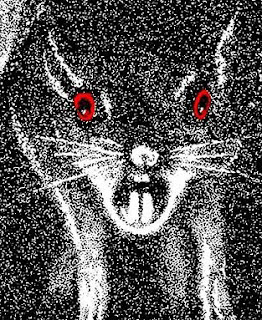 
Okay, in my mind, a crawlspace and an attic are pretty much the same thing for places I'm not fond of crawling around in. I'd been in our attic before. There is barely room to stand at the middle of it. And most of the floor is covered with dusty insulation.  I didn't actually get off the ladder when I popped into the attic. I shone a flashlight around and didn't see any signs of a dead (or alive) animal. And the smell of decayed flesh didn't seem very strong in the attic. I relayed this information to my wife who received the information with barely veiled skepticism. I invited her to climb the ladder and see (and smell) for herself. She did and reluctantly agreed with my conclusion that the attic wasn't the source of the smell.

Relieved that I hadn't had to deal with a rotten dead thing in the attic, I proceed outside to mow our back yard and weed, comfortable in the knowledge that I would have to deal with anything more disgusting than a slug or snail. I had been weeding for about an hour when my wife called for me to come into the garage.

She'd gone on a frenzied search of the garage and discovered a gap in some boards on the wall near the door that entered into our house. My wife told me to shine a flashlight in the gap. I did, but I didn't really see anything. My wife informed me that she could see fur and that the smell was very strong at that spot.

I have to admit that my sense of smell is pretty much shot after having raised two kids and dealing with pets over the years. But I did get strong wafts of decaying flesh near that spot. My wife informed me that I needed to open up the wall and remove whatever was there.

I was pretty much resolved at this point that there was no getting around this. So I retrieved my saber saw from a shelf in the garage along with a drill and a pry bar. After about 15 minutes of sawing, drilling and prying, I removed a section of the wall. And sure enough, there was a furry something about the size of a softball wedged in between the wall studs. I removed a small cross stud and knew the next step was to pull the thing out.

My wife urged me to just reach into the wall space and pull the thing out. Now, although I had gloves on, there was no way I was going reach into the wall and pull out a decaying dead animal.(I assume it was a rat.) I went into the kitchen a retrieved my barbecue tongs that I used with my gas grill. My wife made me promise that I would throw the tongs away after this. I agreed.

I still felt a bit squeamish about pulling the dead rat out of the hole with the tongs directly like a half grilled chicken breast, so I stuck a small plastic garbage bag down over it. There was no getting around it now. I stuck the tongs down the hole, grabbed the rat and pulled. I couldn't help but let out a few howls of disgust as I plucked it out and quickly put it into another waiting garbage bag.  In all fairness, my wife let out a few squeals too.

We double bagged the thing and I hauled it out to the garbage. I then returned and began plucking leaves and chewed insulation out of the hole while my wife conjectured how the rat got in there and why it died.  I did let out a few more grunts of disgust as I pulled stuff out of the hole including something that looked like a rat tail.

I threw away the bag of debris and returned to weeding while my wife proceeded to disinfect the garage and cover the hole in the wall with cardboard. That night she went to the Internet to discover everything she could about rats and how they enter houses.

I hate the Internet.

So other than the task of caulking every corner of the garage, the rat incident is behind me. All and all, I think I handled it okay (other than the minor screaming in revulsion as I plucked the dead rat from the wall).

You know what they say, "A dead rat in the wall is worth two in the closet...er...or something like that."