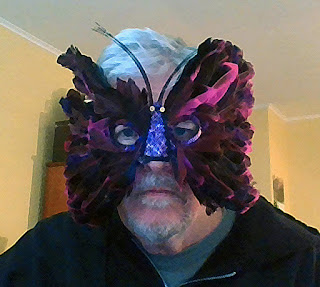 There has been a lot of debate lately about whether or not a face mask can help protect you from the COVID-19 virus and that the whoop de do filtered masks should be reserved for medical staff. Most of it is a moot point because, like toilet paper, most of the masks were swooped up early in the frenzy. You can order disposable masks on Amazon, but they all seem to come from China and won't arrive for a month and a half. Plus they are the ones that only filter out dust and pollen anyway.
So the do it yourself versions have become popular. Most are fashioned from bandanas and people basically look like they are going to rob a train or bank. fortunately very few trains are running and no banks are open so there haven't been any misunderstandings that I know of.
The first mask I wore in public was a prop from a surgeon costume I'd worn in a skit at work many years ago (don't ask). It seemed like a legitimate enough mask, but I think it is actually made of paper that looks like cloth, so I don't think it will make it through many washings. Next I just tied an old Seahawks bandana around my face cowboy style. Works in a pinch, but it kept sliding off my nose, so not sure how much good it does.
I tried another mask using a method from the web where you fold the bandana around hair ties that slip over your ears and keep the mask over your face. The hair ties unfortunately folded my ears down and made me look like something out of Lord of the Rings. And they kept popping off. So I finally just found some cotton fabric with a pirate print and hand sewed cloth ties onto. The result is a crude but effective face mask. By effective, I mean it covers my nose and mouth and, if nothing else, keeps me from sneezing and coughing on people.
Not that I have been within six feet from anyone but my wife and kids for weeks. I have ventured to the store with my wife a few times and it is almost comical to see people try and stay distant from each other while trying to find canned goods. Our store even created one-way aisles (that most people ignore) to keep people from trying pass each other in the tight space.  But Americans can't seem to self regulate. Just as people ignore speed limits and don't use blinkers, we encounter people who just push up the wrong way in the grocery aisles and seem oblivious to the six-foot rule. I want to get a t-shirt made that reads, "Better six feet away than six feet under." But someone would probably take it the wrong way.
I think having a sense of humor during these times puts me in the higher risk category.
Posted by Time at 9:11 AM