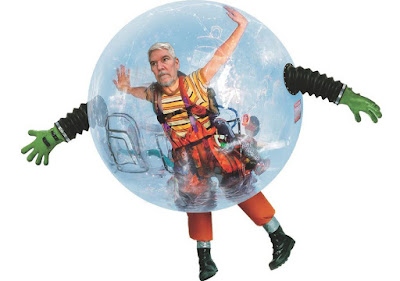 Walking now is like a strange, sinister ballet. You never know what the other person is going to do when they approach. It's like a social distancing game of chicken. Who is going to veer off before you reach the six-foot buffer zone.
I've noted joggers are the worst.  They inevitably come too close and are usually huffing and puffing and splattering spittle without a mask. People with little kids and strollers are pretty bad, too. But I can't blame them. Toddlers are like cats and difficult to herd.
Picking up take out is stressful, too. Some restaurants are very organized and everyone knows where to stand or hover waiting for the sanitized pen to sign or the iPad with plastic wrap to insert your debit card. But last night this woman came in behind us and just stood in the doorway so you couldn't possibly keep six-feet between us and her when we exited. I find myself feeling very nasty towards my fellow humans in all of this.
Warm weather makes it worse. People want out of their houses and they flock to the waterfront to marvel in its expanse. We see them standing like zombies staring at the sun while it sets and then shuffling off into the dark when it has melted into the Puget Sound.
While walking, I have noticed how wildlife has become emboldened by all of this. There are rabbits everywhere. And I swear we saw a couple of feral love birds in the trees a few days ago. A owl has been frequenting the wild hillside behind our house and pairs of crows are strutting around on every corner. It's as if they are all waiting for us to leave and give them back the planet. Though the sea gulls will miss the french fries. But they'll adapt.
Even our pets have grown used to us being around all the time and figured out new ways to have us give them treats to be left alone. So they grow fat during the pandemic along with many of those in quarantine. Which, according to the COVID-19 "experts" makes you more at risk.
I continue to lose, or at least not gain, weight. I walk four times a day and don't have much of an appetite.  I have tried to return to the habit of daily showers but it is hard to give up extra sleep time for personal cleanliness. And who really sees me anymore except on a video meeting. My hair is gross and growing shaggy since haircutting isn't an essential service. But people notice on our video meetings that some people continue to appear with short hair and are obviously engaged in bootleg haircutting activities.
The stay at home orders confirm my theories about human nature and many people's belief that rules only apply to the other person. All of the cars (which seem to be multiplying daily even without anywhere to go) seem to be doubling the speed limit. This is beginning to take its toll on the bunny population and soon, I suspect, pedestrians as well.
And you see packs of pedstrians walking without any obvious attempt at social distancing even though they don't appear to be related. As this thing drags on I suspect there will be more an more of ignoring the laws and rules of social distancing. That will either lead to this thing ending in a whimper or a bang.
At least the bunnies will be safe.
Posted by Time at 11:14 AM