Pulling your head out 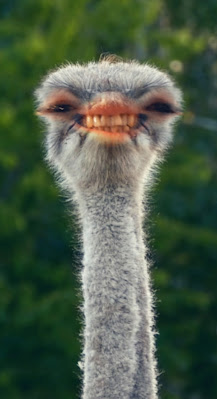 : unwilling to recognize or acknowledge a problem or situation

It is hard to believe we still live in a time where some people believe the world is flat, racism doesn't exist, COVID is just the flu, global warming is a myth and government should regulate people's bodies and sexual orientation. It is also hard to believe that people believe an ex-president is still above the law and can threaten democracy without consequences.

I will leave it to your imagination to guess who that ex-president is (it is not Obama and his name rhymes with "take a dump."

I had high hopes for the Internet when it first appeared. Who wouldn't like a wealth of knowledge at your fingertips with a few key strokes. I have a degree in Journalism. And at the time they taught us the importance of verifying the truth of everything you write unless it was your opinion and then you at least had to admit it was just your opinion. Who would have dreamed that at some point there was so much garbage being spewed in cloud that you'd have to prospect every bit of data for a rare glimmer of truth. There is no such thing as a trustworthy source any more.

Tik Tok is a perfect example of lie after lie in a medium we were taught at one time should be proof -- video. After all, you have to trust what you can see with your own eyes, right? But swipe through the never ending clips on Tik Tok and you are overwhelmed by the "truth." Big Foot and UFO's thrive on Tik Tok as do ghosts and endless tales of narcissists and heartbreak. One could come away believing every conspiracy theory ever concocted.

But I remember looking at Tik Tok before the pandemic and there were all of these videos from China predicting the spread of COVID. It sounded like conspiracy BS. And then boom we were on lock down and two and a half years went by.

So what is real and what is just crap? And why do people spread the fertilizer of fake news? To become Tik Tok famous? Are their lives so insignificant that they need to set their farts on fire on video to get followers and fleeting fame?

The first step towards truth is pulling your head out of the sand and paying attention. And it is important not to allow yourself to become so polarized in your beliefs that you are only receptive to truths that match your own. Objective articles attempt to show both sides of the story and stick to facts, not conjecture.

It isn't easy to focus on the truth. All of the social media algorithms are designed to feed you what you want to hear, not what you should hear. And even if you pull your head out of the sand, it is important to clean the sand out of your ears and eyes.