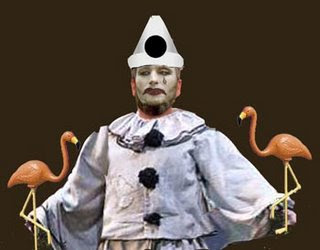 "The commedia is over!"
--Pagliacci

Isn't a sad clown an oxymoron? It's like jumbo shrimp.

I've never seen the opera Pagliacci (Clowns). But anyone who has ever seen Seinfeld will probably remember the episode where Crazy Joe Davola dresses as Pagliaccio the clown to seek revenge. Oddly enough, my other association with the opera is a Rice Krispies commercial that played when I was a kid. The main character trys to pour a bowl of Rice Krispies but the box is empty. He begins singing, "No more Rice Krispies, We've run out of Rice Krispies. My tears will not stop until I hear snap, crackle pop." It was sung to music from Pagliacci, the opera.

I don't mean to seem unsophistocated, but I've never been able to develop an appreciation for opera. Oh, I like some of the music from operas, but sitting through one, even with subtitles is a painful experience for me.

I'm sure some people like operas. People go to them all of the time and gush. I fall asleep.

I like Jesus Christ Superstar, A Rock Opera. But I suppose purists would say it's not quite the same thing. I bought the soundtrack when I was about 13 years old. I memorized all of the parts, including Mary Magdelaine's. I think I would have made a pretty good Jesus (no offense Mickey).

Admitting I like an Anthony Lloyd Webber musical is pretty bold of me. I also like Phantom of the Opera.

Does that make me a bad person? If it's any consolation, I've never seen CATS.
Posted by Time at 10:12 PM

I saw Phatom of the Opera, which is perfectly painless as far as operas go. I also saw Madame Butterfly and enjoyed it. But, I tend to get involved in the costume, set and lights rather than trying to understand every word they're blathering on about.

I see Shandi has the hiccups. I put opera in the same category as fine wines. My experience with wine is that the more expensive or hoity toity it is, the worse it tastes. Such things were created by the elites to claim some form of sophistication over us commoners, who don't get it, with good reason. Same thing with opera; you produce it in a language and manner that most people can't understand and then laugh at them because they are sitting there going "huh?" Well, as far as I'm concerned, the "connoisseurs" of all this stuff can choke on it, because the dirty secret is that most of it really DOES taste awful and sounds like noise. Give me my rock and roll and sangria and I'm happy......it sounds good going down.

Shandi, I think you have the right idea. It is the spectacle of it all that probably should be the experience, not worrying about understanding Italian.

THE Michael, I don't know. There is something to be said about a fine, red wine. This is not to say that the more you pay guarantees it will be good.

My daughter has just become a classical music fan. It is funny to see her enjoy the music and every once in a while say wasnt that on Bugs Bunny? I guess back in our day they taught us about classical music and operas from cartoons and commericals.

Have a great day!

Cherish, That is so funny you mention learning about classical music from Bugs Bunny. That is exactly where I was exposed to it for the first time.