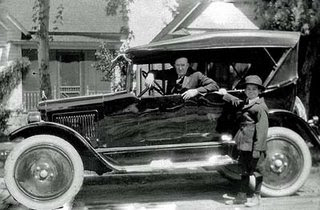 It was just a year ago that I wrote a tribute to my father for Father's Day. He died in 1992. Here it is Father's Day again, and once again I find myself feeling a bit empty that he is gone and I have no one to buy a tie for. But I can still write my gift of memory for him and his father.

My father, Eugene Arthur H****, was adopted in Portland, Oregon when he was four or five years old. As I've climbed through the branches of my family tree, I discovered that his adoptive father, Eugene Chester H****, had been placed in an orphan's home in Iowa along with his younger brother after his father had faked his death and abandoned his wife and three children. Apparently his mother couldn't take care of the children an put them two of them in the orphanage.

I don't know how long my grandfather and his brother stayed in the institution, but I imagine his experience being an orphan was the incentive for adopting my father. And if that hadn't happened, I probably wouldn't be here. So I honor my adoptive grandfather with the same respect I would if he had been related by blood. 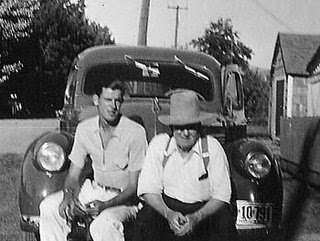 My father did not speak much of his father. Occasionally, my father would tell a story of how his father taught him to swim by tossing him out into the middle of a pond and walking away. Fortunately, my mother chose to take my brothers and I to the YMCA to learn to swim instead.

The only other thing I know about my grandfather was that he was a staunch union man. He worked for the Boise Capitol News setting type on the old printing presses. He was a Mason.

I have a vague memory of him sitting in a chair under a tree in my grandmother's backyard while I fished out of an old wash tub with a stick and string and paperclip hook, trying to hook washers that I pretended were trout. I don't recall ever hearing my grandfather say a word. He died in December 1961. I was almost four years old.

Silence was not a trait my father inherited from his father. He talked and sang and laughed, usually at a very high volume. I think I inherited my appreciation for humor from my father. I almost said I inherited my sense of humor from him, but as I recall, his jokes were pretty corny.

My father loved to clown around and tell us jokes. I always laughed even though I didn't always understand his jokes. For example, he would ask us why the farmer threw his cow out the window. We'd shake our heads. Then he would say, "Because he wanted to see the Jersey Bounce" and roar with laughter. None of us knew that the Jersey Bounce was a dance craze out of the 40s. Most of his jokes were like that. 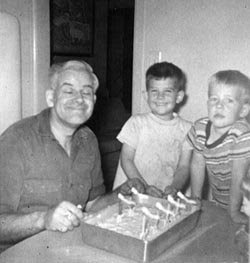 I remember every morning when he would look into the mirror when he was getting ready to shave he'd say, "Mirror, mirror, on the wall, who is the fairest of them all?" If I was within ear shot I'd cry out, "Not you." My father never got tired of that routine. 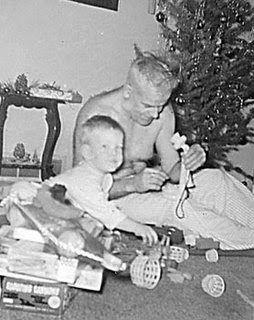 My father always took time to play with my brothers and I when we were kids. He'd hit baseballs for us to catch, he'd play Monopoly with us and he taught us how to play Cribbage and Hearts. He'd pop us popcorn and make us rootbeer floats. He didn't always have much patience, but he always had plenty of love. And I always felt loved by my parents. So in retrospect, I was a pretty lucky kid.

So, happy Father's Day, dad. You may not have been the "fairest of them" according to the mirror, but I will always be proud that you were my father.
Posted by Time at 1:52 PM

You always write the best tributes. I envy many aspects of your childhood. Great memories to have Tim.

Tim, reading your stuff is proof that your Dad did good work.

Your dad sounds like an awesome person and even better dad. You are right you were very lucky!

You don't think you inherited his sense of humor because his jokes were corny...? I got news for you, Tim. The nut didn't fall far from the tree.

I had a great uncle in Iowa who faked his death and left his pregnant wife with six (soon to be seven) children, at least one of whom ended up, not in the orphanage, but the reformatory. I'm starting to think that you and me, we must be related.

Thanks Shandi, The more stories I hear of other people's childhoods, I feel pretty fortunate.

Thanks THE Michael, I only wish I was as good a person as my dad.

And thank you, Cherish. My father did have a good heart.

Kristy, I would prefer to think my jokes are more witty than corny. And keep in mind that wasn't a blood relative who faked his death, but he may indeed have been related to you. Though I have come to think of you as the sister I never wanted.

another new banner. your creativity astounds.

Thanks Hayden, I actually just dusted off the banner. But everything is new if you haven't seen it before.