Something's out of tune 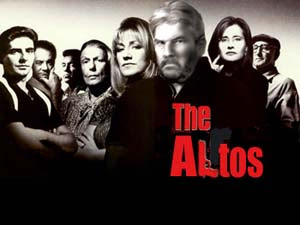 "I've been dreamin' about those Johnny Cakes."
--Vito Spatafore, Jr., The Sopranos

Okay, I'm going out on a limb here and speak out. What's up with the Sopranos this season? We watched the season finale last night waiting for some big development and for some major character to be whacked and nothing. The stupid thing ends with a Soprano family Christmas. This is the way they end a series in June?

All season the Sopranos messed around with Tony getting shot by his uncle and wandering around in a life changing coma (that doesn't help him lose any weight); Vito is exposed as being gay and runs off to Connecticut to mess around with a volunteer fireman and his Johnny Cakes then later gets beat to death and has a pool cue shoved up his corner pocket; Anthony Jr. is exposed as a wimp, becomes a construction worker and then falls for a Puerto Rican single mom who is 10 years older than him; Christopher gets his new girlfriend pregnant and marries her only to fall for a real estate agent drug user that Tony has the hots for; and Paulie gets prostrate cancer after discovering his mom is really his aunt and his aunt is a nun and his real mother.

I am disappointed in you HBO. I'm almost afraid to watch the season opener of Deadwood. Please don't tell me Al Swearinger is going to stop swearing. I couldn't deal with that.

It used to me you could count on HBO to give you cutting edge disgusting crap without having to make a point. Will I be forced to watch prime time spelling bee's and rip off's of American Idol on ordinairy network television? I beg of you HBO, give me the old fashion gang wars the Sopranos used to engage in. Give me something to look forward to.

Or forgetaboutit.
Posted by Time at 6:30 AM

Save yourself...turn to The History Channel immediately!

I promise there is enough blood and carnage there to keep you entertained for a lifetime.

Mickey, I've tried watching the History Channel. It's just so unbelievable. No, it's premium channels or nothing.

Since I can't afford cable, I have no idea what you're talking about, but it sounds like your run of the mill soap opera to me. So much of TV life is passing me by I'd be the odd man out in any conversation concerning contemporary cable. I'd have to slink off towards some corner to hide my ignorance. It's gotten so bad I've started to order documentaries from Netflix such as the history of the Panzer IV (Panther) or something having to do with dying redneck transexuals. As it is, I'm having problems with this new term the networks are using...."All new episode!", because the sonsabitches keep throwing in reruns during the regular season...grrrrrrrrrrrrrrrrr

THE Michael, When someone tells me they can't afford cable, I have to say, you can't afford not to have cable. That glowing box is the window to the soul of society. But you can get the Sopranos on DVD from Netflix.

I do not have HBO but I am Italian so CURSES to HBO for ruining the ending to an Italian Series!