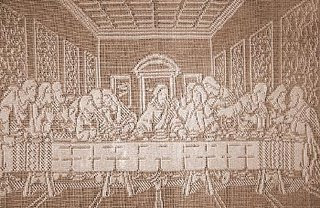 My grandmother was a prolithic crocheter. She crocheted a 4' x 6' version of Da Vinci's Last Supper that she framed and gave to my mother year's ago. As long as I can remember, it has hung in our family room. It's still in my mom's house. I'm no expert when it comes to crocheting, but I think it is pretty impressive.

I snapped the above photo of it when I was visiting my mom in Boise last month. She told me she didn't like the thing and was thinking about getting rid of it. I think the real reason she wants to get rid of it is that she never got along with my grandmother (her mother in law). My grandmother has been dead more than 30 years, so it strikes me odd that my mother would only realize now that she doesn't like the crocheted Last Supper that has hung in her house almost 50 years.

I suppose I could hawk it on eBay. What with all the flap about the Da Vinci Code, it could get some interest. I would be my luck to get someone to say it's worth thousands of dollars and then find out my mom chucked it in the trash a week after I left Boise. She's been known to do stuff like that. My toys were always disappearing when I was a kid. Mom always feigned innocence, but I'm pretty sure she tossed half of our stuff out when we were distracted by television. 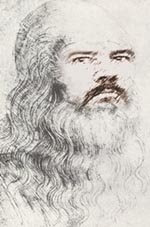 I'm not sure how Da Vinci would feel about any of this (not my mom throwing out my toys when I wasn't looking, but the crocheted Last Supper or the Da Vinci Code). He'd probably be too busy painting the Mona Lisa, writing things backwards and being a Mason to notice. He was a genius after all and an inventor (though you would think if he was so smart he could have invented a wig to disquise his baldness).

I have not read or seen the Da Vinci Code. I understand it has something to do with a conspiracy by the Knights Templar, the Masons and the Catholic Church to cover up information that Jesus was married to Mary Magdelene and had a daughter. I think the reason they covered it up was because there would be a lot of disgruntled priests when they discovered that the whole celebate thing was a joke. Also, Jesus having sex just isn't a mental picture most people are prepared for, especially in the light of his own "virgin" birth.

I think the big revelation, however, was that Jesus may have had a daughter and her descendants were the kings and queens of Europe and the lineage has been tracked carefully even today. I think this is as big a crock of crap as the alien conspiracy whack jobs that think our world leaders are descended from creatures from outer space (though they may be on to something with Bush).

I don't put much stock in long term secret organizations. We live in an era of instant information where people like Britney Spears can't even hide the fact that they are pregnant again ten minutes after they have tossed the home pregnancy test in the trash. So I kind of doubt that anyone could have kept a daughter of Jesus secret for 2000 years.

This is not to say I am in any way suggesting that Britney Spears is in any way a descendant of Jesus. Did you see her interview on NBC with Matt Lauer? Pluleez...lose the gum, get someone else to do your make up, put a shirt on and a skirt that fits. And if you and your husband are doing so well, why wasn't he there at your interview?

Regardless of whether you believe in the premise of the Da Vinci Code or that Britney and her husband are still very much in love, I would like you to consider buying my grandmother's beautiful crocheted copy of the Last Supper. I'll let you know when it is listed on eBay. Oh, and I'm also selling a copy of a credit card receipt from the Last Supper signed by Jesus. It is guaranteed authentic. I've examined it closely, and let's just say that Christ really liked chicken wings, but he wasn't a real big tipper.

Tim, don't you realize that the REAL reason she kept that tapestry was because, being a member of this secret society, she crotched a hidden message into the picture and has no intention of actually throwing it out, just threatened to in order to perk your interest and perhaps pass it on down the line? Maybe the real reason you had this itch to be a King or a knight is that you are actually descendant of the Knights Templer........she just never mentioned it.

You sure do digress alot. Is that like devolving? Scrapping your knuckles yet? hehe

And, I would highly recommend reading the book at least.....it makes uncomfortable sense, even if it IS (cough) fiction, which is why Catholics hate it so much.

THE Michael, "crotched" and "crocheted" are actually very different things, so I must assume you are sending some secret message that has something to do with Michael Jackson.

I own a Knights of Columbus hat, BTW.

This is sortof related, I have a crocheted doilie thing my greatgrandmother made ages ago. I keep it on a coffee table. Thing was, I didn't notice that it had a happy little victorian woman dancing about in the design until I lived in a two story apartment and happened to look down on it from the second story. It reminded me of that scene in X-Files where this kid makes these little dots and squiggles see and Scully happens to take the stairs to the second story of his home and looks down and notices that all these little dots make this face of a missing woman abducted by aliens. Ohhhh was I digressing???

You're rubbing off on my Tim. I'm doing that photoshop thing as well.

Anyway, back on topic. I read the book and was impressed with the movie. I think it's possible. Not probable, but possible. I do think that Jesus has sex. Maybe he didn't have a kid, but there's no way he didn't have sex. He was like 32 or 33 right? No way he was a virgin. But then, his mom never admitted to anything either.

The flames of hell are lick'n my toes.

Shandi,
I'm so proud. You are digressing. You are Photoshopping your face on famous people, you think Jesus had sex and you are going to hell with all of the fun people like me. THE Michael is going to be so jealous.

Tim, you must save the crocheted Last Supper. It is your heritage! Mom's throwing stuff out is an insideous evil. DON'T let her get away with it! (Remember all those toys. Do it in tribute to them.)