A black and white point of view 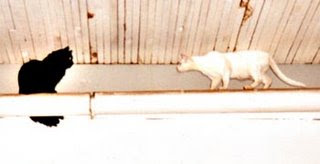 Oh we could use more eloquent terms like duality or dichotomy when we talk about Yin/Yang. But I truly do think it is the delicate dance between opposite natures that is the building block for our world(s). I don't think anything is actually all Yin or all Yang. To me the goal is to balance the two as they chase each other's tails within you. But then again, I have a tendency to oversimplify things.

It isn't always easy to see opposites as complementary. We are taught to view good and evil, happy and sad, hardworking and lazy, and so on. And some religions even go so far as to justify all of the evil in the world by blaming it on free will. They say polar opposites are neccesary in order to provide us with a choice. The concept of Yin/Yang short circuits that concept by mergering all of those opposites into balanced parts of a whole. You don't have to choose Yin or Yang. You just have to accept both. It kind of kicks the concept of sin in the butt.

Again, I have a tendency to oversimplify.
Posted by Time at 10:57 PM

You been talking to Bob? Damn, and I thought I was his pet prophet. As far as free will is concerned, well, it's highly over rated. You put any human in a candy store, and sans any immediate influence other than to say that pigging out would be a bad thing, that inventory is going to disappear! Now, if you provide some sort of guiding factor, like, I own this candy store and I'll stomp your ass if you eat my candy, and subject KNOWS his ass is getting kicked if he follows his natural inclinations, of course he's more likely not to eat that candy, unless he's a masochistic glutton, that is. None of us have free will, actually, for there are consequences to everything we do, at least here on Earth. Man is built to follow the path of least resistance, just like all the other animals, and if that greases his skids for a fast track to hell, well, who's fault is that, really? I can't recall actually witnessing a devine being kicking anybody's ass since I've been around. Oh, and no, that was a natural phenomenom that wasted New Orleans, my hellfire and damnation friends, and you can't prove otherwise.

THE Michael, I hear you brother.

Teri, Shandi put me up to it. BTW, congratulations on your wedding!

Personally, I love oversimplification. It makes things so much more simple.

Lights, You've always seemed like a simple man to me.

I've always liked the yin/yang symbol. My mother told me it was evil. So, I grew up thinking it was some sort of witchcraft symbol like the pentagram. Of course, I got old enough at one point to discover the truth. But, for a long time there, the symbol made me uneasy. Seeing it plastered on the face of a slightly demented monkey only intensifies the reaction.

Shandi, To many Christians, anything but a cross is a sign of the devil.

And let's not sell Mank short. He isn't slightly demented. He is totally demented. He's sitting here now wearing a set of fake Bubba teeth, acting like no one will recognize him. Stupid monkey.

When we were kids, my best friend's family acquired two kittens who were litter mates. A white male and a black female. They named the white kitty "Yin" and the black one "Yang." I don't know for sure if they were confused or just contrary. Anyway, I've been confused about which is which ever since. Thank you for simplifying matters. Honestly.

Thanks Kristy,
I took that photo years ago at a friend's loft and have been looking for a excuse to use it. My work here is done.