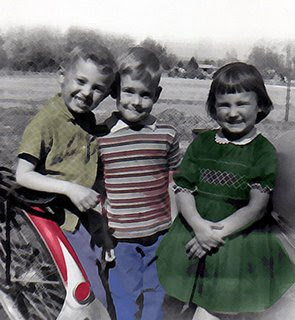 My mother had 12 brothers and sisters. Most of them were as prolific as my grandparents at producing progeny. So, I swear you can't swing a dead cat without hitting someone who is very likely one of my cousins. The sad thing is, I can't even tell you how many cousins I have without looking it up on my family tree software program. What's even sadder is that I honestly don't really know a single one of them.

Although my 81-year old mother has difficulty remembering what state she lives in, she can still pretty much tell you the names of each of my cousins, their spouses and their offspring. She can also tell you which one robbed a bank, which one is a cross dresser and which one thinks they are the Scarlet Pimpernel.

Most of my interaction with my cousins was when I was a kid. The photo above is of me (center in case you couldn't recognize my smile) with my cousin Mike and his sister Mary Lou. They were my Aunt Irma's oldest kids. Mike was a year older than me. Mary Lou was my age. Aunt Irma had another six kids before divorcing her husband. His name was Coombs. That was reason enough to get a divorce.

Aunt Irma was a twin. Her brother, my Uncle Ira was special. When he wasn't in that place in Idaho where they keep special people, he was living with my grandmother sequestered in his bedroom convinced the communist Chinese were tunneling under the house to get him. Apparently he felt he had something the communist Chinese wanted.

My Aunt Irma always reminded of Jimmy Dean, the country singer who went on to lend his name to pure pork sausage. She kind of looked like him, but she really sounded like him when she talked. I could never understand why my mother's side of the family all talked like they had just stepped out of the Grand Ole Opry. Perhaps it is just the way country people talk.

Odd as she was, Aunt Irma at least had a sense of humor. My Aunt Gladys didn't. She was just odd. We used to call her Aunt Happy Butt behind her back (Glad Ass...Happy Butt...get it). Aunt Gladys married a man named Otis. It was his second marriage and he came with a passle of kids from his first marriage. From the looks of them, Otis could have very well been married to a first cousin when he produced them. My brothers and I nicknamed them "the Martians."

I could go on and on. Aunt Dolly had eight kids. Uncle Jimmy had five. Uncle Dewey had three. Uncle Marion had five. Aunt Alma had four. Uncle Tommy had three.

Don't even get me started on second and third cousins. It's a wonder Tess and I weren't related before we got married.

I guess that could be another post.
Posted by Time at 10:18 PM

Yea, my Mom had lots of brothers and sisters and thus I have dozens of cousins (Bob, I'm good today) running around. Fortunately, there didn't seem to be any inbreeding going on, as I never met any with gills or an IQ of 8. I did meet one cousin at my Grandfathers' funeral that was so hot I could have easily took a stab at re-routing the family tree, but my first wife kept me honest. I haven't seen any of them since and I never feel much desire to. Any number of Aunts or Uncles could have rescued me from a childhood of orphanhood but didn't step up, so I've pretty much taken root in my own soil ever since.

I must say I find it fascinating when people write about their families. Family dynamics, historical heroics and the daily quirk that make up the environment we all grew up in can only equate to a story not unlike something David Lynch would make into a film. I think it's interesting when people relay to me that they have Civil War heroes or famous people in their family lineage, but that sort of attachment to someone else's fame is not for me - even if they are related to me. What truly speaks to me are the silent qualities I possess that were an unintentional gift to me from my family. The kind of gifts I will keep with me regardless of where or what environment I grew up in. I have been told that my eyes look like my Tia Panchita's, my smile is that of countless before me, I laugh like my Tia Becky yet I never grew up around her and I have my Tio Agapito's sense of humor and I don't recall a single joke. I am amazed at how much of me is still here despite the fact that I am no good at watering, comforting or influencing myself into who I am on a daily basis...my family seems to have taken care of that for me. Most of us Mexicans love to knock boots and we have plenty of children to prove it - hell, I swear I have a whole town to my own some days, but it's not the size that amazes me, it's my family's ability to continue, despite great dysfunctional odds. I am living proof.

T - your blogs continue to make me think about my own life. Some days that is painful, but most days this Mexican girl loves the mental tease....thank you.

Thanks for the morning laugh. "Happy Butt and Martians" had me cracking up. I love it when you talk about your past. Gunter must have you thinking about skeletons (Uncle Ira in the special place for special people :-0 ).

Boy, I could go on and on about my family. My contact with them comes and goes. I guess I get on a family kick and just gorge on them for a while. My cousins aren't the bizarre ones in the family. Apparently, it's my mother and brother that are the family joke. (Hell... maybe I am too!)

lol, poor Aunt Gladys. Another great family post Tim! Oh, and btw... you're as cute now as you were as a lil boy. ;o) Love the photo. Peace my friend.
~gina~

It seems mental illness runs in the family. I often worry that I'm promoting inferior genetic stock by considering having my own children. There are so many good things about our stock too though, so it's hard to come to a definite answer.

THE Michael, I take it none of your cousins can play the banjo, either? Pity none of your aunts or uncles came forward to keep you out of the foster care system. But you turned out pretty good growing in your own soil.

Miss Bliss,
I've been told many times that one can't choose who their family is, but you can accept them. Glad you are enjoying the blog, especially if it helps.

Shandi, What do you mean your cousins aren't the bizarre ones. I used to read Terri's blog :)

Gina, Thanks as usual! I'm glad you liked the photo. It was fun restoring it. Take care.

R. According to mom, Uncle Ira was special due to the medications they gave him for his epilepsy. So I don't think you have to worry about him. It's being related to me I'd be more concerned with. :)

JanePoe,
My father was adopted, too. I used to suggest to my mother that it would have been better if she had been, too. :)

My Dad's side of the family is like yours. My dad is the youngest of 12, the 12 had 48 kids (I am second to the youngest and have cousins as old as my parents) But I have not seen any of them since I was in middle school when my parents divorced. That was a lifetime ago.

Cherish,
I have some cousins who were as old as my parents, too. Coincidently, Tess now has a 4 year old cousin and an aunt in law who is ten year's younger.