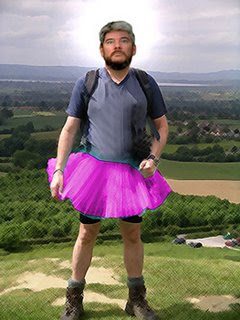 "So chances are that the truth could come waltzing up to most people wearing a pink tutu and a feather duster in its bum and no one would recognize it anyway."
--Tim Id, Lost and Profound

I've always wanted to quote myself. So here is the pink tutu. You'll have to use your imagination when it comes to the feather duster. Some things are just private. And I can't really waltz.

The truth is that I am just an ordinary person with extraordinary aspirations. But then, aren't we all?

Take geniuses for example. Someone is considered a genius if they have an IQ of 140 or more. Wouldn't it be a bitch to have an IQ of 139? Wouldn't that just suck? No one wants to be known as almost a genius. "Hey, there is my son. He's not quite a genius, but he is close."

The truth is that it is important whether you win or lose, not how you play the game. Coffee is for closers. Winner's do get the spoils. The meek won't inherit the world. Nice guys do finish last. No one will respect you in the morning. Government doesn't work for your good and no, there is no check in the mail.

The truth is that the truth is not pretty. Just look at my picture.
Posted by Time at 6:26 AM

Now that's what I'm talkin' about.

You know how squirrels are: anything that allows easier access to nuts is okay with us. So, I'm totally cool with the pink tutu thing.

TIM, you look FANTASTIC in a tutu!!! It helps to have such rugged and manly knees, the contrast with the feminine tutu is quite stunning.

I am enternally grateful that you honored my request. I've done nothing but fantasize about the tutu thing since you mentioned it.

You make a much better pimp though.

Well, then, I guess I'm screwed. They conducted a test once, in which the tester told the subjects that if they let the plate pass without taking any money out, another dollar would be added to the plate, and if the plate made a certain number of rounds, which he kept secret, everybody would get an equal share of the plate. It NEVER reached the limit, someone invariably grabbed everything on their pass. So, instead of everybody cooperating for the ultimate prize, the "winner" always screwed everyone else for his own short term gain. Oh......yea......forget me; we're ALL screwed. Nice tutu, by the way.

Miss Bliss, Ye shall know the tutu and the tutu shall set you free.

Squirrel, Don't let the tutu fool you. And funny, the monkey said the same thing about my banana.

Thanks Shandi, Nice use of paragraphs. Maybe next time I'll be a pimp in a tutu. Fine Ass Tim Sweetness would like fine in a tutu, too.

Michael, This wasn't in a church, was it?

Hey Tim, check out my blog. I've got a picture of me and a pink tutu too. Hope you like it.

I'd beg to differ ... you are not just an ordinary person!

Thanks JanePoe, I'll admit I am pretty odd at that :)

Someone with an IQ of 139 would probably realize that 139 basically = 140, and that the IQ levels and cut offs are arbitrary--just like most things in this world.

Anonymous,
If you don't really believe close only counts in horseshoes, that is probably true. It wasn't really the point of the post, but only someone with an IQ of 140 or greater would have known that.