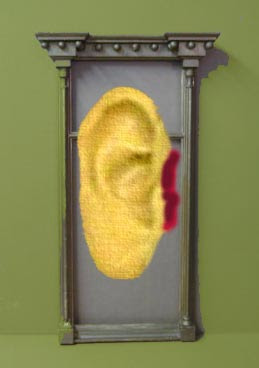 I get this ear-ie feeling sometimes that I'm not making any sense. Or if I am making sense, it doesn’t mean anything to anyone but me.

Maybe that is nonsense. Or maybe it is just being ear-rational. But everyone wants to be relevant.

I’d just like to leave this world thinking I contributed something besides a pumpkin carved in my image and likeness (though it was graven). It’s easier to think you will make your mark on the world when you are young. When you are middle aged, you start to realize that leaving a mark in the world is a bit like writing your name on a sandy beach with the tide coming in.

When I was young, I wanted to be an artist. I wanted to paint or sculpt or draw. I drew a picture of a horse when I was 11. It won a gold ribbon at the Western Idaho Fair as part of a 4-H competition. I left the world of competitive art at that point because where can you go from there but down?

I never liked taking art classes. There was something about learning about form, light and composition that took some of the joy of creating out of it. There is nothing like a bunch of rules to take the “create” out of creating.

I did make a few slab and coil pots in an art class in junior high that were kind of interesting. The best part of working with clay, however, was slamming it onto the table to get the bubbles out.

My last formal art class was Drawing 101 in college. I drew some killer vases and cow skulls. I had hoped we were going to draw naked people. I got an “A” in the class anyway.

By that time, I gave up on the idea of being an artist and decided to become a writer. There were still rules to contend with, but I read a lot growing up and being a natural born mimic, I could fake understanding grammar with the best of them.

It is easier to explain to people that you are a writer than to tell them you are an artist (though one could argue that they aren’t potentially the same thing). I have never met anyone who actually made money off from being an artist. They generally make money off from being baristas or bicycle messengers and paint on the side. The same is true for “writer” writers. If you really want to make money writing, you need to go into public relations or advertising. Only a rare person makes a living being a novelist. I am not a rare person.

So to fill in the gaps between making a living and being an artist, I took up blogging. It is an odd preoccupation. It pays nothing. It is appreciated by few and overlooked by many.

Which brings me full circle to my original ear-resistible point -- I am not sure I am making a meaningful one. But this post is becoming an earful, so I’ll end it.

Oh and a pox on any of you who try and use ear puns in your comments. 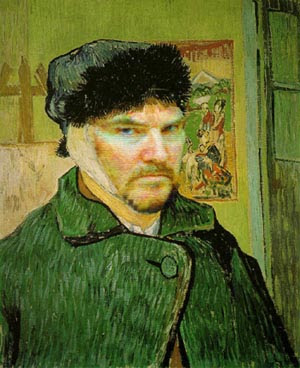 Let me be the first....hehe

EARlier you asked about making sense. You keep it ironically witty and easy to read, which makes sense.

My Mom was an exceptional artist, but like you said, making money as an airtist rarely has anything to do with actual talent; there are tons of other requirements which have to be fullfilled before your talent gets you anywhere, particularly knowing the right people, those guardians of the watchtowers of high art who decide who to let in and who to ignore. Alas, or, perhaps, ho-hum, Mom did not pass on her artistic gene to me, just my stature, damn her. I suppose if my writing could be construed as actually being a talent, then perhaps it manifeted itself in some other fashion, but I'm not going to benefit from it unless I happen to run into one of those guardians and he/she likes me. Tim, you and I will have to be satisfied with being big fish in a small pond, that pond being this small community of bloggers who enrich each other with our otherwise unappreciated talents. It could be worse. We could be in padded cells whipping out crayola masterpieces.........

There's a story here; I can smell it. (I have a nose for such things.)

THE Michael,
You've been poxed.

FP,
I won't be cutting off my nose to spite my face (just an ear).

how eerie. I posted on sounds and come here and find - ears.

(careful! mind your poxing tim, I said eerie NOT eary. and it is. eerie, that is.)

I know it’s been many a year
Since Vincent made art without peer
His work is by many held dear
His fate, well it might bring a tear

Dear Tim,
No funny comments from JP tonight ... just a note to say your writing, your contributions in your job ... neither are irrelevant. I think we all the prize (the publishing contract, the recognition, etc) but, in the end, the lesser-known contributions in this life are the ones we will be remembered for (if not the masses, at least the people who matter the most.) Anyway, JP thinks you rock! much peace & love, The JanePoe!

Lights, a closet poet now, are you? Still, a pox upon you my friend.

JP, Thank you. I appreciate that very much! Good thoughts to you as well.

Forgive me for being a little bit behind here, but...

I do consider myself an artist. Not by profession though. I have made some money, a bit here a bit there for commissioned work (usually portraits). Some of it helped pay for art supplies while in college. I took all those really boring art classes. The most valuable class was "Color". It seemed the most boring class so I saved it for last. We mixed colors non-stop... just mixed color after color. Nothing creative at all, just the mathematics of color. That class shaved the time it took me to do a painting by half.

Anyway, I've been asked why I don't quit my job and pursue art full-time. Apparently I'm wasting my talent. The reason I don't quit is because I'm not stupid. They call em "starving" artists for a reason. I also realized that I didn't want my talent to become a product that can be purchased for a price. I don't want to rely on the opinion of others to enjoy painting. As it is, I paint when I want and what I want. If no one buys it, who cares. I don't need the money because I have a job.

I hope that my paintings are passed down through my family to my great great grandchildren. I hope they hang on the walls of my descendents for centuries. It a way, it gives me immortality.

Shandi, Having seen your work, I would definitely call you an artist. And you hit the nail on the head. The best way to create art is by doing it on your own terms. The minute someone pays you, they rob us a bit of our creativity. I may not get paid to blog, but it gives me a freedom I've never had when I was paid to write.