Over the river and through the woods?

We made our annual trek east of the mountains to Boise for Thanksgiving. As I normally do, I rented a car at the airport. I booked it online and went for the cheapest available -- an economy car. In the past this was not a problem, because inevitably the car rental counter person would take pity on me and upgrade me to a full sized car.

That was not the case this time. The counter person just smirked at me when he read my reservation on the computer monitor and said, "We have you down for an economy car. Have fun with that." We were given the smallest Chevy I've ever seen. If I'd had a fez with me, I could have joined the Shriners in the holiday parade. 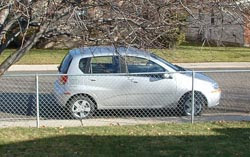 Clown car aside, we were able to pick up my 81-year old mother and take her to my brother's house for Thanksgiving dinner. My mother confessed to me a week ago that the DMV would not renew her driver's license two years ago because she could not pass the eye test. This, unfortunately, did not stop her from tooling around in her 1972 Chevy truck for the past couple of years. My brothers and I have hopefully convinced her that that is not a good idea without a license.

Regardless, we picked my mother up and drove her to Thanksgiving dinner an listened to a 15-minute monologue about how many acorns she has raked up in her front yard. I'll spare you the details.

My brothers and I all cook. This is probably because my mother hated to cook (though she does like to rake up acorns...go figure). Anyway we all cook. And my brother cooks Thanksgiving dinner every year...the works, turkey, stuffing, green bean casserole, rolls, gravy, pecan pie and this year a killer pumpkin cheese cake. It's really quite impressive.

What's more impressive is that we managed to get through dinner this year without talking our childhood or politics. My brother and I don't agree on either. His selective memory that excludes remembering tormenting me as a child has always amazed me. The only thing that amazes me more is his penchant for Rush Limbaugh and our current president.

But neither topic came up this year during dinner. Politics did make a slight appearance during Pictionary and another party game later, but we managed to gracefully ignore each other's rhetoric. 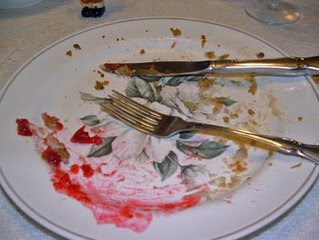 Oh, and Dan, if on the slight chance you read this, thanks for dinner and Bush sucks! :) Nice last dig in there Tim!! Seriously though, glad you and the fam had a drama-free, bearable (if not, enjoyable!) Thanksgiving holiday.

Next time, pay for the mid-size. hehehe, JP

burying the hatchet in that last comment, tim? right about up to the handle, I'd say....

Glad to hear your holiday was (somewhat?) enjoyable.

Maybe you should introduce your pumpkin squirrel to your mom's acorn collection. ;-)

Thanks JP, It actually was enjoyable, too. And I can't bring myself to actually pay for an upgrade. It's the principle.

Hayden, Did I ever tell you how I almost cut off the neighbor boy's hand with a hatchet when I was about 9 or 10 years old? I was known as the hatchet boy of Colorado Avenue. It was an accident, though.

Thanks FP, My mom's got plenty of squirrels gorging on the acorns. The problem is that she also has a large dog that likes to chase squirrels. I can give you my mom's telephone number if you'd like to hear the story. :)