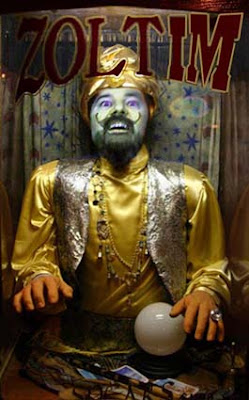 Tom Hanks' movie Big was on over the weekend. It had been awhile since I'd seen it and I forgot how much I enjoyed that movie. The movie is about the magic of youth and the reality that getting older makes you less aware of that magic.

The cool thing about movies is that they can make magic seem real. Tom Hank's thirteen year old character puts a quarter in a fortune teller machine at a carnival and makes a wish that he was "big." The machine lights up (despite not being plugged in) and grants the boy his wish. He wakes up the next day with a 30-year old body. At first he is frightened, then excited and finally desperate to return to his 13-year old existence.

The plot may seem hackneyed now, but at the time it came out, it was refreshing and inspiring. Seeing it again just drove home to me how much I have aged. Being middle aged is a buzz kill for magic.

I remember believing in magic. I remember the little rituals I had as a kid like avoiding stepping on cracks or carrying around rabbits foots and fourleaf clovers. I remember this plastic ring my best friend in 5th grade got out of a gumball machine that had the head of a tiki god on it. He swore it was bad luck because the girls chased him every time he wore it. I remember borrowing it in hopes that some of that "bad" luck would rub off on me.

During the 70s I toyed with more adult magic of crystals, tarot cards and psychotherapy. None of pop metaphysical fads really captured the magic of being a kid. And the older I get, the more magic I lose to the realities of war, politics, economy, crime and just living. But I still look for magic every chance I get.

I think those of you with children have the advantage of being able live vicariously through your children's magic. I urge you to relish that and bath yourself in as much fairy dust as you can borrow from their stash. Because as Tom Robbins and See's Candy once said, "It's never too late to have a happy childhood."
Posted by Time at 6:26 AM

tim, a magic machine doesn't need mundane electricity! It generates it's own buzz...

I still believe in fairies. Lets see, how does the spell go, rub two fairies together until you get sparks, right?

humm. take two magic mushrooms and sit yourself down on a toadstool -

I know there's a spell in there somewhere.

Whitesnake, Yes, Blogger could use a little fairy dust to kickstart it.

Hayden, I think it is rub sticks and stones together to make the sparks ignite. But magic mushrooms will work, too. Or at least you will believe you are magic :)

Great post Tim. You're right, those of us with kids (who are still young) can live vicariously through the magic they see in the world. Sadly, at some point, these same children grow, get jaded, and live with some of the disappointments that tarnish the luster of magic. That being said, I still believe in magic. And maybe, just maybe, it can be like Robin Williams in Hook where he rediscovers the magic of his childhood ... and the children all cry, "You're doing it Peter!! You're playing with us." (or something to that effect) ...in any event, we can create magic, whether jaded, cynical, tired, etc. We have the capacity to play and create. And in a way, isn't that what we're doing on these lovely blogs everyday?? much peace, JP

You're right JP, the magic is in playing and creating. So blogging is magic in that way.

Don't forget about the movies in which an adult returns to childhood. They usually don't have a very good time. Besides, now you get to go on cruises and weedend getaways so you've got some magic left to you.

Sometimes I forget to play. Sometimes it feels like work.
You're right, children make it much easier to believe in magic. We made a bit of our own this weekend.

Thanks for the reminder.

Lights, we'll all get that chance to relive our childhood's soon enough. You can DEPEND on it.

Shandi, Play shouldn't be work, but work should be play (or at least I think it should be...my employer has other ideas)