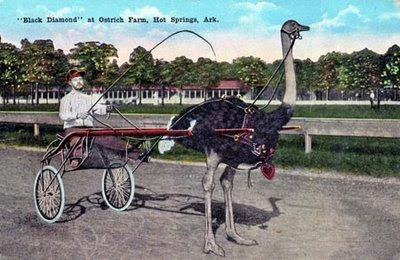 I never saw a purple cow,
I never hope to see one;
But I can tell you, anyhow,
I'd rather see than be one.

Sometimes you make do.

I think Purple Cow is one of the first poems I ever memorized. Of course, it isn't much of a poem. But I could remember it. It was kind of like "Fuzzy Wuzzy was a bear; Fuzzy Wuzzy had no hair; Fuzzy Wuzzy wasn't very fuzzy, was he?"

That always cracked me up as a kid.

Although for years I thought Ogden Nash wrote Purple Cow, it was actually written by Frank Gelett Burgess. The complete title was Purple Cow: Reflections on a Mythic Beast Who's Quite Remarkable, at Least (in 1895). The full title is almost longer than the poem. Once Burgess wrote the poem, he regretted it. This was expressed in his sequel to the poem:

Ah yes, I wrote "The Purple Cow"
I'm Sorry now I wrote it
But I can tell you Anyhow
I'll Kill you if you Quote it!

I kind of like that more than the original poem. Basically, I think poems should be like visits from relatives -- very brief.

Oh and if you are still wondering about the ostrich in a racing harness photo...well don't.

Ostridge racing really should have taken off. I mean, they are the perfect racing stock......lose to many races, and you get a pretty good hamburger, and a healthy one at that! Greyhounds....well.....they just make hyper pets you can't keep with pet bunnies.

I didn't and I won't

I think the first poem I memorized was... something like...

wow, shandi - I never heard the second 2 verses at all! that's new to me -

Well, the fellow 'driving' the ostrich is interesting :-) As you can tell, I usually prefer brevity in poems ... the pages long narrative ones usually lose me early on, even if their poetic prose is flawless.

THE Michael, taking the minority position on a topic as usual.

Whitesnake, I knew you wouldn't.

Shandi,
A nod's as good as a wink to a blind bat.

Hayden,
Commenting on a comment...oh well.

Okay, not much of rhyme scheme, but still.