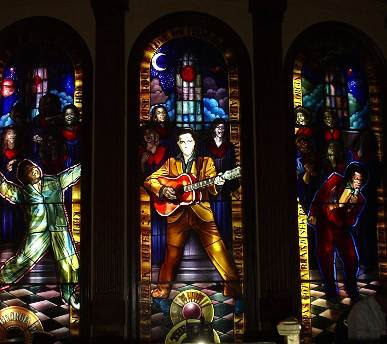 This is the last day of the conference. Our badges are drooping. The consultants have largely packed up their booths and hospitality rooms and moved on to the next conference.

I've survived several mindnumbing sessions of people stating the obvious about the obvious.

Oh the awards...yes, we won three first place awards and two grand prizes. I have to admit I almost tripped my CEO getting up to the stage to accept them. For 15 minutes, all the world was right. The awards are packed in my bag already. They'll go with my other awards gathering dust next to the mechanical monkey.

I finally figured out why I keep going back to the Hard Rock (other than the lack of choices). I went there for lunch yesterday and finally noticed Elvis glowing down from a predominate stainedglass window. I felt at peace until my shrimp fajiitas came.

I ventured into a Durango Steakhouse last night. From the outside it seemed fine. Once inside I realized I'd stepped into the south's version of a Sizzler. I gave up red meat several years ago, but the temptation was too much. My Idaho roots burst through and I ordered crap. And damned if it didn't taste good. If I live in the South, I'd die in a couple of years from the fried stuff. But I'm traveling so it is ok. But Weston, my server, kind of smirked when I ordered the deep fried ice cream for dessert.

But at least I'm catching up on my current affairs here. I've watched several interviews with Mary Kay Lutirno, a documentary about Lorraina Bobbet and several more true crime stories. I miss my satellite and TIVO.

So, it's rise and shine early tomorrow and drag my bags on the train to the airport. It will be good to be home and see Tess. I've missed her most of all.

I wonder what the special is at the Hard Rock today?
Posted by Time at 9:09 AM