Smile when you say that.... 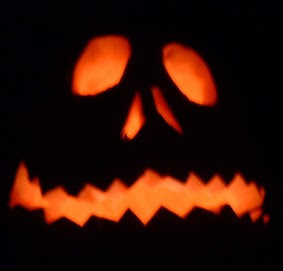 I can't carve a happy pumpkin. Tess carves happy, nice pumpkins. Mine have to be demonic. Because that is the point of carving a pumpkin for Halloween. They are supposed to be scary. They are supposed to frighten away the bad spirits. That's their purpose. Because Halloween is when spirits are supposed to be mucking about looking for a place to stay (kind of like relatives). To keep them from dropping by and staying, you turn of the heat and lights and put a bunch of scary jack-o-lanterns around to fright them (again, like you do with relatives).
Of course, the tradition in the old country was to use turnips. When people came to America, they realized that turnips were a pain to carve and pumpkins were in abundance. Thus, the carved pumpkin tradition.
But every year, Tess carves a pleasant pumpkin that grins at you nicely like the village idiot and you have to smile. But Tess is a teacher and doesn't like to frighten small children when they come begging for candy on Halloween. I carve evil looking pumkins because I'd just as soon answer the door with a chainsaw roaring and send the little mooches screeking away in their Harry Potter costumes and cute little Ladybug suits. Again, they are mocking the purpose of Halloween...to scare the bejeezus out of people. When I was a kid, it was some hideous zombie or werewolf. That's a Halloween costume.
It's this politically correct crap that is ruining everything. Heck, most schools don't even allow Halloween celebrations around here. The school system in Puyallup (yes, that is a town name in Washington...and yes it is pronounced the way it looks, like the sound you make puking...phewwwaalllup) banned Halloween costumes and celebrations because they didn't want to offend WICCIAN's...our modern day witches. I must forgive the people of Puyallup, though their idea of a good time is hanging out at the Walmart. They've just taken the Pacific Northwest desire not to offend anyone to a new and absurd extreme.
But as usual, I digress. I guess it is okay that Tess makes happy pumpkins and I carve evil ones. It all balances out. And we do make a lovely couple, don't we? 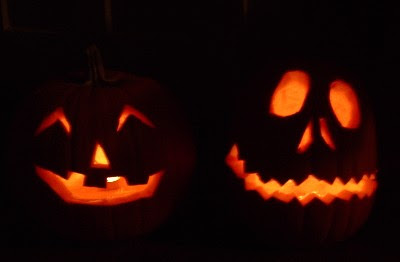 Um, yours is kinda cute, and happy too... I mean, in that eevil, like fruit of the devil kind of way, of course...

Well, shoot. I guess I shouldn't have gone for the "Nightmare before Christmas" look. I should have used the Mechanical Monkey as my model. Now he is demonic looking.:)

Oh WOW, I just noticed the resemblance! Ok, that pumpkin is perfect. Not scary-demonic, but, well just right. I gotta show the pic to Alden, he's gonna get a kick out of it. That's our favorite 'lets watch it together' movie.