One of the odd little anomalies of Web based reality is that we begin to measure ourselves in site stats. Tracking hits gives us that little affirmation that people are actually out there visiting our Web pages. It can become an obsessive thing, especially if you track statistics with one of the many sites out there that feeds into that desire to know that someone from Iceland visited your Blog at 2 p.m. on Sunday and stayed for 5 minutes before leaving in disgust.

I admit that I look at Web stats for my Web pages. And I found it was very interesting and predictable that my stats were pretty low during the holidays, especially since I was on a cruise and didn't make any new entries. After all, people are just sitting on the edge of their computer seats waiting for my next entry, aren't they?

So, when I announced my engagement on January 5, I was startled to discover that my Web hits went from 30 or 40 a day to more than 200. It was the affirmation I was seeking. People were indeed just waiting with baited breath for my wisdom to hit the Blog and were pouncing on any entry.

Then it dawned on me that Elvis' birthday was January 8. Every year around this time, people hit the Web looking for information about the King. They Google him and inevitably they run across Dizgraceland: A Tim-Elvis Experience. And inevitably, they are very disappointed.

But I look on the bright side. At least the disappointed people did not send me hate mail this year for disrespecting the King.

Not that I disrespect the King. Elvis has somehow become firmly interwoven with my life. Perhaps he has a message for me. Perhaps it is just a coincidence. But everywhere I turn, Elvis crops up. Now, you could say this is true for everyone, but I choose to believe the King speaks to me through many signs. For instance, when Tess and I were in Nassau a couple of weeks ago we went for a very expensive and non-informative carriage ride. The driver's name was Elvis and his horse's name was Nat King Cole. Elvis gave us a tour of the city that touched on the many high points of Nassau. I now know where the jail is and where all of the radio stations are located.

Here is a photo of Elvis and Nat King Cole: 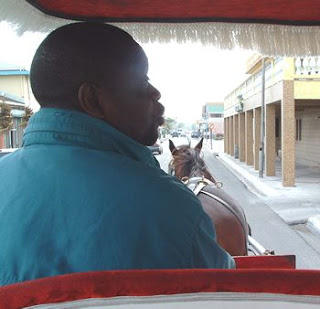 Elvis also showed us many historic buildings and literally showed us a sign: 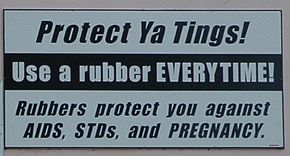 Because I am the chosen one.
Posted by Time at 4:37 PM