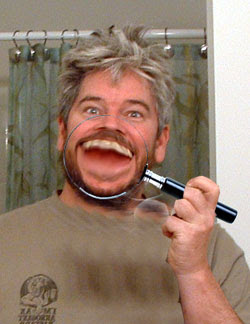 I was waiting for you
I was sat in the sun
I could picture your face on the tip of my tongue
I woke up laughing
--Robert Palmer, Woke up Laughing

I didn’t really wake up laughing. I woke up staring at the clock, dreading the digital tick from 5:44 a.m. to 5:45 a.m. I don’t use an alarm. I always just wake up at the time I’m supposed to get up (or almost always). I don’t know if it is a gift or a curse.

The cat was agitated this morning for some reason. Normally she just lays at the foot of the bed just out of range of my tossing and turning feet, curled in a cat ball. This morning she complained to me in a series of staccato meows and followed me into the bathroom. This was full moon behavior, but it isn’t a full moon. It is a waxing crescent. So I haven’t a clue why she stared at me intently while I brushed my teeth with the Sonicare and then ran under the bed.

After showering and dressing, I went downstairs. My other two cats appeared unimpressed by any of the weird vibes going on this morning. They lounged around on various couches. I was just grateful neither had puked on the carpet. This seems to be the drill every other morning. One of them bazooka barfs on a regular basis and I spend quality time with a bottle of resolve and a cleaning rag.

I washed down my morning regimen of pills (two for blood pressure, one for excess stomach acid, one for cholesterol and a few vitamins) with a diet Dr. Pepper. Then
I threw a Jimmy Dean breakfast croissant into the microwave and marveled that the box stated it was “meal sized.” It was barely the size of a hockey puck and has the same texture when you eat it.

While I waited for breakfast, I walked out to the mailbox to send back my latest random Netflix choice. It was a stupid, low budget movie called Zzyzx:

“Out in the middle of nowhere, on a remote desert road, the lives of three people are forever changed in this sinister tale. Heading to Vegas, Lou (Kenny Johnson) and Ryan (Ryan Fox) take a detour onto Zzyzx Road, a supposed hangout for extra terrestrials. But as they drive along searching for Martians and Klingons, they accidentally hit a man and must find a way to dispose of his body. Their problems only increase when the man's wife shows up.”

When I popped the Netflix into the mailbox, a rabbit hopped out of the bushes in my front yard. I wasn’t surprised to see a rabbit. He’s been hopping around my yard for a couple of weeks now. I assume he is someone’s pet who busted out of the hutch and became free range. He doesn’t bother me and I don’t bother him. He steers clear of me for the most part, but this morning he hopped right up to me. And right behind him was a big orange Tabby presumably trying to figure out if this was a mutant mouse or another cat with big ears. I watched them for a couple of minutes to make sure there weren’t going to be any skirmishes and then went back inside to take my Jimmy Dean breakfast croissant out of the microwave.

At precisely 6:45 a.m., I shouted goodbye to the cats, hopped in my Nissan Frontier pick-up, and backed out of the garage. The orange tabby and the rabbit were still facing off in the bushes. I watched the garage door close and told myself out loud, “The door is closed,” so I wouldn’t turn around a block away and come back to check it. Sometimes I still do. I waved at the bunny and the neighbor’s cat and drove to the train station as I unwrapped the Jimmy Dean breakfast sandwich.

At 6:55 a.m. I pulled into the train station parking lot after waiting for a garbage truck to inch gently over a couple of speed bumps to avoid damaging his load of trash. I pulled into my spot, hopped out of my truck, beep locked it twice so I wouldn’t come back and check to see if I locked it, and walked to my spot on the train platform. The loud mouth know-it-all transplant from the East Coast was pontificating to some guy next to him about when they were going to build another train station in a nearby town. He was spouting information I had told him a couple of days ago. It was almost verbatim exactly what I had said. I wished I had given him a few outrageous facts just to see if he would have parroted those back too.

The train arrived at 7:05 a.m. I dashed on board and sat in my seat and immediately begin checking my e-mail on my new pocket PC that has replaced my Blackberry as my favorite OCD activity. It basically combines all of the characteristics of the Blackberry, a Palm Pilot and telephone in one blinking package.

My train arrives at King Street Station in downtown Seattle at 7:30 a.m. I walk up the stairs and make the light at the crosswalk without waiting. This is a good sign. I am at my desk at 7:35 a.m.
My day has begun.
*AUTHOR'S NOTE: I realize that this post was about as entertaining as watching paint dry, but it represents the truly great thing about blogging. You don't have an editor asking you why the hell are you submitting this kind of crap and telling you there is no way they will print it. Besides, sometimes I like to watch paint dry. Just don't eat too many of the paint chips.
Posted by Time at 7:45 AM

Oh contrare Tim, I enjoyed hearing about your morning. You could make the morning constitutional sound entertaining (I'm trying to be ladylike here so hope you know what I mean, hehehe).

My favourite parts.....the fact that you have a spot of your own on the train platform and that the garbage truck driver inched over the speed bumps so as not to damage his trash. Priceless!!!

I think my morning constitutional would constitute TMI :)

And of course I have my own spot on the train platform. It is part of my OCD. As for the garbage truck, well, I look for irony everywhere and usually find it.

You are probably right about the TMI on the morning constitional, I was just saying :)

Irony... that's what I have always loved about your sense of humour... the irony you find in every day things. Keep sharing and I love the bed hair in your pic.

You have something against watching paint dry?

It was not a boriing post, quite the opposite. It is some times refreshing to know that half way round the world somebody else is getting up at the same time I do albeit a day later.

sometimes I wonder how posts like these are more pleasant than reading someone stretching too hard for wit - it's the every-dayness, the sharing that is part of vanished family life. I think humans must be hard-wired for this stuff. comforting somehow. With today's frantic speed these little connection points are missing in many lives.

Peeking into someone's life is never boring. I don't use an alarm clock either, my eyes spring open at 5 a.m. even if I've just gone to bed at 4.

I agree with the others. This post wasn't boring at all. I love getting little glimpses into the lives of strangers. And I just LOVE that picture. I laughed so hard when I saw it. Thanks for the laugh - that felt good.

Steve,
I think it is a day earlier. But I get your point.

Hayden,
Interest take on it. I hadn't really thought of it that way before, but I think you are right.

Kat,
Again, I'm not sure if that is a gift or a curse.

So, who is this Cindy Mae Eby? Your #1 fan apparently. She's kindof sexy in a redneck sortof way. ;-)

Shandi,
Can you say, "Non Sequetor?" Sure you can.

Not too many people stop by the original Dizgraceland anymore. And even fewer go to the Strange But True room. Cindy Mae Eby was an unnamed barfly my old friend Michael J photographed in Reno many, many years ago. I didn't think she'd ever find out her photo was immortalized on the Web. I don't think she could find her foot let alone the Internet.

I haven't used an alarm clock since I had kids.
Don't need ion anymore, my eyes automatically pop open at 4:30.
It sucks.


Ya know Tim, it's not too late for you to get those somewhat rabbit looking front teeth fixed.

Hmmmmm, "a reply that has no relevance to what preceded it"

When did you make this a requirement? Damn! You mean I'm gonna have to actually read a post, contemplate the message, scroll through the many comments to ensure what I'm about to say hasn't been said before, form a response that contributes intellectually to the subject at hand without merely relating it to my own life... shit, that's too much work.

Blaznfyre, That photo does kind of make me look like John Elway, doesn't it?

Shandi,
Every one here at Freedom's Place needs to obey the rules of common decency...wait a minute...wrong blog. Comment any way you choose :)